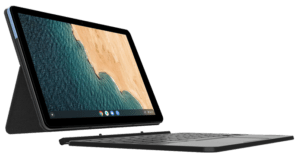 A combination of lightweight and durability for its chassis, and decent brightness level, and crisp pictures for its 12.3-inch display, are some of the features that make the X12 Detachable great to use.

It has a stylus along with its easy-to-use keyboard and it edges out the Surface Pro-7+ when it comes to battery strength. After a full charge, the battery will last you for 24 hours.

While you enjoy the battery strength, you should know that it comes with less-powered processors.

The ThinkPad X12 Detachable has a form factor, similar to that of the Surface Pro-7+. If you take away the bottom part of the original ThinkPad design, you will have the X12 Detachable. With a weight of about 1.8 pounds, it is light despite being made from magnesium alloy.

The finish of the X12 Detachable is matte-black with a somewhat gritty texture. The 12.3-inch display has thick bezels on the edges, a feature that is similar to what we got in the Surface Pro. The webcam sits at the top of the screen covered with a sliding lens.

The kickstand in the design helps you rotate the tablet to a 160-degree angle. Not forgetting the measurement which is 11.2 by 8 by 0.3 inches, something similar to the Surface Pro-7+.

The display on the ThinkPad X12 Detachable is bright and colorful. A 12.3-inch sized screen and 1920 by 1080p resolution. The screen delivers for most business activities like scanning through documents, web browsing, and putting together a slideshow. It is also excellent for entertainment like TV shows and movies.

The display is quite colorful as it portrayed the color of the movie we saw in such a balanced way. It has great brightness, reaching a peak of 376 nits, which easily surpasses Surface Pro-7+ which peaked at 358 nits. Whether you are outdoor or indoor, the ThinkPad X12 Detachable has a display that is capable enough to handle both.

The processor in the ThinkPad X12 Detachable is a Y-series chip. The Core i5-1130G7 from Intel is better than the old chips but it isn’t what you call a powerhouse. Our model has a RAM of 16GB, and it is capable of simultaneously opening multiple tabs while streaming YouTube videos and listening to music. In all honesty, we never expected this tablet to handle such an amount of workload.

It has a 512GB M.2 PCIe NVMe solid-state drive which is more than enough storage to accommodate whatever you want to put in there.

It delivers quick feedback and the travel time is surprisingly great. The response rate is admirable for a tablet keyboard. The touchpad has enough space and it is well responsive to both normal touch and the gestures for Windows 10.

Although the surface is not made from proper glass and it sometimes takes more than one attempt to respond to gestures.

Because Lenovo opted for an efficient processor, the battery gained much from this. On the battery test, it lasted for a few minutes over 11 hours. The test included putting it at a brightness level of 150 nits and continue surfing the web.

This is way better than the average laptop performance of a little over 10 hours and is easily trumped the Surface Pro-7+.

The notable absentee among ports in the X12 Detachable is the Type-A USB port. What you will get is the Type-A USB 3.2 port at the bottom and the Thunderbolt-4, the 3.5mm headset jack, and the Nano-SIM slot that supports 4G LTE at the left side. On the right is the Kensington lock that sits next to the volume button.

The most notable drawback in the X12 Detachable is the absence of the Type-A USB port. If you don’t like it you can sell your laptop for cash to us and buy another one. Lenovo delivered an excellent 2-in-1 tablet suited for business-oriented users. The display, performance, and battery life are all great features on the ThinkPad X12 Detachable.