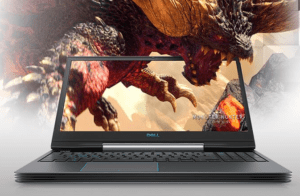 The year 2020 was filled with lots of ups and downs. But one thing that mostly counted as positive, was the tech releases that happened this year. There has been a lot of exciting new hardware for gamers and creators alike this year, and that could only mean one thing – gaming laptops have gotten significantly better.

We have taken the liberty of compiling a list of the top 5 gaming laptops that you should consider buying this holiday season for you or your loved one.

Like everything made by Dell’s Alienware, the Alienware M17 R3 is an enigma, and for many reasons, is the best gaming laptop in the year 2020, in our opinion. The R3 stands for the third generation of the Alienware M17 series, and with it comes the 10th Gen H-series Intel processor and the Super edition of NVIDIA’S 20 series GPU. In any gaming arena, the M17 R3 will be a formidable force to contend with, and to top it off, the design of the laptop might as well win the hearts of everyone in the room with its elegance.

For many competitive gamers, the downside might be the inclusion of the beautiful 4K display. We say downside because it means gamers would have to settle for lower framerates when playing with the M17 R3. However, the M17 R3 is perhaps the lightest desktop replacement on the market, and its 17.3-inch display provides a fully immersive experience. It makes sense that they would want to slap a 4K display on this beast.

Thanks to the AMD Ryzen 9 processor, the G14 can shred through both gaming and multi-threading tasks with ease. The AMD processor found in the G14 makes the laptop a very efficient laptop as its battery can last for up 11 hours, according to several battery tests.

The Gigabyte Aorus doesn’t come with an aesthetic for everyone, and definitely not a price for everyone. In terms of performance, however, the Aorus 17X is as powerful as they come. With the 10th Gen Intel processors paired with the super edition of the NVIDIA GeForce RTX 2080, you are looking at one of the most powerful gaming laptops on the market. The 240Hz screen and a mechanical keyboard make it a complete gaming laptop, built like a tank.

Asus has been having a very good year so far with their gaming and creators laptops. It is no wonder they decided to make one that would serve gamers and creators alike well. The Asus Zephyrus Duo 15 immediately grabs attention with its dual-screen, but it has more than a pair of screens going for it. Under the hood is a 10th Gen Intel processor and a Super Edition of the 2080 GPU to match. Oh! Did we mention that both screens are 4K?

Storage: 1TB HDD or up to 1TB PCIe SSD

The second AMD powered laptop on our list is the Asus TUF A15. It would seem that Asus has discovered the secret of making really affordable and powerful gaming laptops using AMD CPUs. While the Asus TUF A15 is not as powerful as the Zephyrus Duo 15 or the Zephyrus G14 from Asus, it is still a force to be reckoned with. With the help of NVIDIA’s powerful GPUS and a Ryzen 4000 chip, this laptop would tear through any game at Full HD.

This year might have been a roller coaster for many people, but at least in the gaming world, we have some exciting new tech to choose from. You can trade in laptops for cash with us and use to to buy the new models described in our article.