How to Cool Your CPU

As with many other aspects of building a new computer, the choice of how to cool your CPU can be a bit overwhelming to novice, or even experienced, builders. There are many challenges associated with putting together a new PC, but of them all one of the most critical is assuring you have sufficient cooling for your processor. Insufficient cooling can cause performance degredation, BSODs, and even hardware destruction. Fear not, though, as the decisions are largely straightforward once you have the basic information! 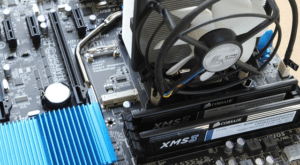 Image by bluebudgie from Pixabay

The first option is running a heatsink without a fan. Heatsinks remove heat from the CPU, but do not have a way of further dispensing of that heat. You may consider a heatsink if your CPU will rarely be stressed. You will not want to attempt overlocking without one of the below options for stronger cooling. Make sure to keep your heatsink dust free and preferably in a direct line from your case fans to aid in cooling. Using a heatsink is silent, so there’s no noise pollution from fans.

The heatsink and fan combo (typically shortened to HSF) is the most traditional cooling option. The heatsink obviously works just like explained above, but adding a fan allows the heat removed from the CPU and stored in the heatsink to be quickly removed into the air, where it is typically removed by the outtake fan of your case. Some CPUs may come with a HSF combo out of the box, which is generally a good option as long as you don’t intend to overclock. If your CPU is overclockable, your stock HSF may not be enough. HSFs come in many sizes; the heatsink size may vary and the fan diameters. It is generally fairly straightforward that bigger is better! Try to find a reputable brand like Noctua for the best performance and reliability. Fans vary greatly in volume, but are typically not noticeably loud unless under heavy load.

Liquid cooling is an option for people who may be pushing their CPUs to the extreme. Liquid cooling pulls heat out of the CPU into water; from there it circulates the water through a system of baffles to release the into the air, and then back to the CPU. If you’re going to be doing heavy gaming or other strenuous tasks like real-time graphics renders. While not required for overclocking, it’s a strong option for those hoping to do so. They will almost always remove enough heat to keep your CPU running cool and fast.

Many liquid cooling systems will also cool your GPU, meaning you can remove even more fans from your build! They are also the most noise efficient solution, being almost silent even at maximum heat load. While most do have fans over the heatsink, they can run at low speeds due to high surface area and efficiency. One slight note of caution: poorly installed or malfunctioning liquid cooling systems can leak, causing massive hardware failure. While uncommon, it’s a risk worthy of noting.

When you go to pick your cooling option, check the specs for your CPU. It should tell many watts of heat it typically produces, and you can use this information to choose a cooler that can handle that heat. Keep in mind overclocking will take heat levels beyond stock clock speeds will generate. Pick a cooler with a little wiggle room, get it installed, and you should be good to go!