Why you might want to install Linux on your PC

Alright, I’ll say it. I am geeking out on Linux and I’m writing this because I am so excited!

Why, oh why, would anyone want to install that weird step child of operating systems, Linux when they have a perfectly great Windows or OS X copy? Yes, you’ve read articles about its benefits and horror stories from friends about how they abandoned it and before I tell you why I installed it, let me tell you the best reason of all In three words: because you can.

Linux, invented by Linus Torvalds, was born mostly out of necessity. Unable to license open source OS, he decided to create one himself. Unbeknownst to him, companies were actually waiting for alternatives from Microsoft and Apple. But you might say, you’re not NASA or HP and you’ve never seen it being used. Except you have! Android and Chrome OS are both based on Linux and are hence the most widely used OS in terms of number of devices!

Alright, I’m not really a computer nerd. I might be a nerd of other stuff but attempting and using Linux seemed intimidating. What truly pushed me was necessity. And if you have already installed it, chances are you’re either wanting to learn OS’s or have a very real computing need. So here goes:

My PC, like many others, came with so much bloatware. Best Buy actually said that they would install good security and driver related software. Hogwash. The PC struggled from the start and I wanted to start afresh. This was my reason. You might want to also because:

1. It’s easy to install on your existing PC. I personally like Linux Mint but distros (just a hip word for Linux distribution) are available in several flavors for every level. This wonderful showcase by ComputeFreely is worth looking at.
2. I recently started a data science role at work. This included learning different technologies like Hadoop and Hive. In my opinion knowledge of coding might spark your interest in its never ending applications and the most organic way to learn is using its “Shell” which corresponds to that PowerShell thingy on Windows you never use.
3. My wife wanted to do graphic art and rather than give Adobe more of our money, she decided to learn GIMP, an open source alternative. Not as powerful as Photoshop, but Linux came with not only GIMP but Inkscape too, a photo editing package. I then found out Blender, a 3D modelling software does everything far more expensive packages do.
4. The best part? Unlimited customization. With no coding experience, I made this: 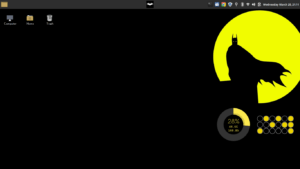 Yep, that Bat symbol in the center of the top panel is my Start button.

Now, are there negatives? Of course! Are there only positives to Apple? No, but given how many of those Franklins we squeeze out of our nose and not be able to resize windows smoothly or be compatible for all games, come on! But in the spirit of fairness, here are some troubles you may have as a Linux newbie:

1. Where to even start? Yeah, few people “start” with a Linux machine. It’s always best to install it on an existing PC or Mac and decide if you want to go all out. To make sense of it all and to install it when you decide to take the red pill, read the excellent Linux Newbie Guide
2. Some things just have to be tolerated. Like WiFi is not the best with Linux. Mine does waver and gets back up on a soft reset but if you want no troubles, an ethernet connection is best.
3. Some peripherals need to be “installed” installed. My Canon Pixma needed special instructions. But that was what got me really familiar with command line installation. It’s actually blazing fast once you get the hang of it.
4. You can’t “take it to someone”. You’re on your own but the support of communities, like the Linux Mint one, is fantastic.

We are so used to OS’s being worth a lot of money that we forget how much Linux has achieved with just volunteers. But don’t let charity dictate that decision, install Linux to try something novel, markedly different and expand your horizons. And as a parting thought, here’s a comic that makes me laugh every time, from The Oatmeal

If you’re looking to sell laptop that for some reason doesn’t like Linux then be sure to check out our website first.