We are always talking about buying and selling laptops and how useful they are. And we rarely, if ever, mention anything about home desktops. Certainly, many people have a desktop still, and for creators, they really are the way to go. So, let's change that today and focus on one of my favorites, the Apple iMac 27-inch 5k display with a core i7. 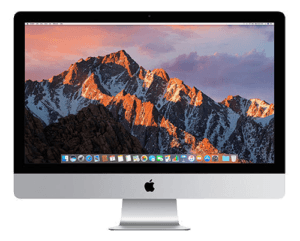 We are going to discuss the max configuration of the 27-inch 5k iMac. Just so you know what's new this year we get Kaby Lake CPUs, new graphics and faster SSds. In terms of RAM - we are now up to DDR4 RAM. We also get a better 5k display that's 43% brighter. Just like the 4k iMac, we trade Thunderbolt 2 for Thunderbolt 3. We also get new USB-C type connectors instead of the mini displayport connectors. Everything else stays intact from last year.

Our configuration is a build-to-order option which we got with a quad-core i7 clocked at 4.2GHz. That's the only core i7 you can get in the iMac. We also went with 8GB of DDR4 memory, because we can upgrade it ourselves cheaper than pre-ordering it. It would set us back about $1,400USD to upgrade to 64GB. 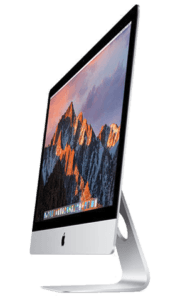 We also ordered a 3TB Fusion Drive which combines an SSD with the inexpensive storage of a hard disk drive. Basically, we did that just o have some extra onboard storage. Of course, if you want the fastest drives to go for one of the SSDs like advised on Sell Laptop Back. But you should know that it does get quite pricey. The 2TB SSD costs an additional $1,300 over the 3TB Fusion Drive. We also get the Radeon 580 GPU with 8GB of video memory, that's a really impressive video card.

When it comes to included accessories, the first thing we get is the power cable. We also have the accessory box which you can configure to other Magic accessories. But the default configuration comes with a Magic Keyboard and a Magic Mouse 2. Also included is a Lightning Cable for recharging those accessories. 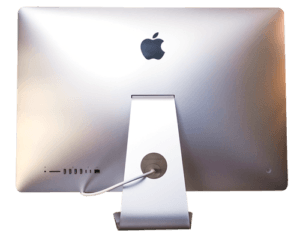 This is the first time that the iMac gets DDR4 RAM. Because of that, the upgrade kits are a little bit more expensive than they were before. In this case, you can get two 32GB kits to make 64GB and that runs about $500. That's a huge step-down from $1,400+.

So, when it comes to upgrading the RAM, they made it pretty simple. All you have to do is lay the iMac flat on its face (make sure to protect the screen). The RAM access door is just behind the hinge so you have to put that up to see the door. Now, to release the door all you have to do is press a button that is hidden just above the power connector. This will gently release the panel and you can simply just simply pry it out. Inside the panel, you will see some instructions on how to remove or install the RAM.

When it comes to removing the RAM from iMac, all you have to do is spread the clips apart and the tray will spring forward. Then you can go ahead and remove the 4GB sticks that were preinstalled. Simply reverse the order to replace the sticks, making sure that they are lined up correctly. Just gently push them in until it clicks and sets properly, once you get all four RAM sticks installed just snap the tray back down and attach the door. By taking a look at the system profile of the computer you should see that the RAM sticks have registered correctly in your iMac.

Amazingly, Apple continues to improve that 5k display. It's now 43% brighter at 500 nits, but you have to expose the ambient light sensor to get the full brightness. The resolution is 5120x2880p, that's scaled up by the OS. So it makes effective use of the pixels to increase sharpness. But it doesn't make everything microscopic. By default, the resolution actually looks like 2560x1440. 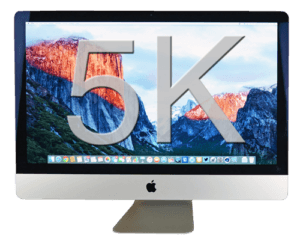 At 500 nits this display can get super bright. It supports a wide array on the color spectrum of DCIP 3. And this is also a 10-bit panel that supports color dithering. We have one billion colors reproducible with this display. One of the ongoing benefits of a 5k display, and one of the reasons why people like the 5k iMac, is that they can preview their 4k projects with enough room for the editor and software. The faster DDR4 RAM performance is better than ever with all of these assets on the screen. It's very precisely calibrated display that is ideal for professional use. Just like all of the other Macs this year, they seemed to have tweaked the anti-reflective coating on the display, and it seems to be more effective. So glare is pretty well controlled.

On the top of the display, you will find the familiar 720p FaceTime HD camera, but it doesn't have a microphone this time around. It is no longer positioned on the top edge of the back which used to be the case with the previous generation. Now the microphone is hidden behind the glass bezel just above the Apple logo. 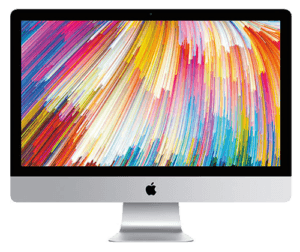 In terms on the I/O they traded the Thunderbolt 2 for Thunderbolt 3 ports. They did keep the USB 3.0 and SdXC card slot, headphone jack, and a gigabit Ethernet port. The good news with the Thunderbolt 3 is that you can now add a second 5k external display to your 5k iMac. With the exception of I/O the and the relocation of the microphone, for the most part, this looks like the previous generation. It's still a really nice looking unit. One complaint though could be that in this day in age the bezels still seem to be a bit thick. 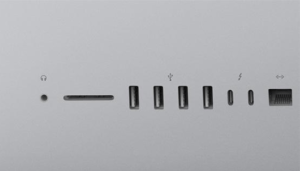 If you look around the edges it is razor thin with 5mm edges that bow towards the center to house all of the components. Of course, the center of that bulge is the articulating stand that allows you to pitch the computer up and down. Also behind the hinge is the very important ventilation that is very silent. Unless this computer is really under a heavy load, you shouldn't really ever hear it. Looking at the bottom edge will notice all of the intake vents from where the iMac sucks up the air to use for cooling itself. It also houses the stereo speakers.

The big black Apple logo on the back isn't just for looks, it houses the radio transparency needed for the Wi-Fi and the new Bluetooth 4.2 radio to work through the metal shell. 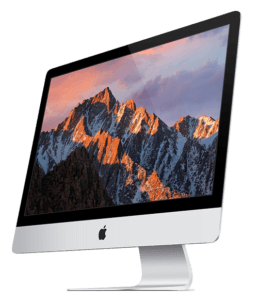 In terms of graphics performance, Apple traded the Radeon R9 with 5GB of RAM to the Radeon Pro 580 with 8GB of RAM and that added about 20 frames per second on the OpenGL score which brought the CPU from 822 to 900, so those are pretty big gains.

Something that is more significant is the read and write speeds of the Fusion Drive which has gone up quite a bit. In terms of general speed, the read speed jumped from 1600 - 2300 and write speeds went from about 400 - 800.

To many buying Apple computers is the best choice. The biggest upgrade for this iMac is the pricing. It seems now that you get more for your money than before. The same configuration used to run you well over $3,000 and now you're looking at about $2,500 - $2,700. 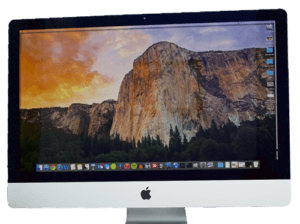