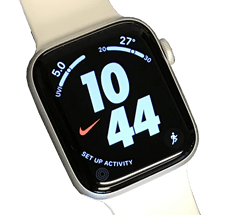 The new Apple Watch 7 is an upgrade from the 6, even though it still has the same over 18 hours battery life, health features, and CPU. Now, it comes with an even bigger display (that is easy to compute for standard apps), and it helps get productivity all from your wrist.

More new features to look out for:

Even with the new upgrades, is the new Apple Watch worth the price point? Let's take a look at in our breakdown.

The Apple Watch series 7 comes with a fundamental redesign that Apple has not given since the Watch 4. Although, it is not a significant change, Apple was aiming for a softer aesthetic. So, the corners of this Watch have a slightly rounded corner. The new Apple Watch has the same 50 meters swim-proof rating as the old models, and this time, it also has the IP6X dust resistance certification.

We wish the Watch 7 was crack-resistant to make it safe to wear during sports.

Overall: A VAMPED UP MODEL

The curve of the screen makes it super easy to read on the Watch at any angle. But unlike how the promotion video proposes, the pour-over effect is not as visible on the Watch. However, it is conspicuous with the contour watch face.

In addition to the large screen and smaller bezels, the Watch 7 is 70 percent brighter when you have it in Always-On mode. And unlike the previous series, there is no noticeable difference with the Face-Awake in direct sunlight. So even if your wrist is not fully raised, you will visibly see your screen.

Apple has maintained the same look on the watchOS over the years: except for select applications unique to the hardware of a particular model. And because the Watch 7 does not feature a new sensor, Apple opted for a bigger screen on the watchOS 8.

Although it is still using the same UI, the new operating system features new tricks on the Watch 7. From the Calculator app to the Control Center, there are larger buttons generally. And some apps like the Home Kit, flex astute animations.

There is also a QWERTY keyboard on the new OS 8, something we have expected for years. It is now easy and comfortable to type away on your wrist.

We expected to see wellness features in this Watch, like the Samsung Galaxy Watch 4 that comprises Fitbit and body analysis. The Watch 7 still features health apps like:

It also added the Auto Cycling Tracking feature, which detects when you start a workout and cycle on your bike.

Overall: MADE TO BE FIT

This Watch comes with the USB-C charger, which Apple claims it charges the Watch faster. This turned out to be accurate as I could charge in 30 minutes from 20 percent to 60 percent. And just like the previous series, the Watch 7 comes with the same 18-hour battery life.

We expected to see an improvement, and thankfully it charges faster than the Watch 6 series. If you charge your Watch 7 in bits throughout the day, you should have enough power to last you through the night or outdoor walk. And with minutes of charge, before you sleep, you should be able to use the sleep tracking feature through the night.

Should you trade your Watch 6 for the 7?

It’s been five years since the Apple Watch came to live. We have witnessed its evolution from the basic model to the pinnacle of smartwatches. The latest entrant, the Series 6, has kept up with the standards continues that trajectory.

The Series 6 has the highest color selection for an Apple smartwatch in history, as it comes in Red, Blue, gold, and graphite. However, the catch is the new blood oxygen sensing feature.

In this article, we take a look at other improvements in the Apple Series 6 and, most importantly, if it’s a worthy upgrade.

Apple’s smooth new WatchOS7 and the latest A14 processor means the Series 6 has a solid interface and high-speed app animation. The smoothness of the OS is evident, as it showed no difference when it was compared with the Apple Watch Series 5.

It gets an artistic look from the new Typograph Faces. In most cases, smartwatches come with bold graphics that creatively display time. Though there is the cost of having further complications on the watch screen for a more artistic look. For some, they prefer the Count Up, new GMT, and Chronograph look as it displays a lot of information. But, there is the personality that the Typograph look brings to this device that already looks so customizable. You have the freedom to customize these complications to your specification, especially as you can use third-party apps. This means you can tailor it to your taste and specifications.

For battery life, the Series 6 remains the same as its predecessors - Apple Watch Series 3, Series 4, and Series 5. The 18-hour battery life did not get an improvement. However, you can turn off the always-on display and reduce the brightness to the lowest, increasing the battery life exponentially. A full charge in the afternoon helped it last two whole afternoons and three nights. For this battery test, we used the Apple Watch Series 6 as it would be used normally. One place it improves battery wise is the charging time. It can be charged fully in 1 hour 30 minutes, which means it has a 30 minutes improvement from the Series 5.

Apple introduced quite a lot of software and hardware upgrades to the Apple Watch Series 6. Most of it doesn’t totally convince us. Apple did well with its new blood oxygen sensing feature, but the regular user might not find it really useful. Although, for interested users, it is an added health information alongside the workout tracking abilities and the ECG test. Apple has shown dedication to providing health data, and this is in line with that vision.

The Braided Loop might be the best-looking band, but it also brings the least amount of comfort. The first time we assembled the Watch, we went with the Braided Loop, but we quickly switched to the Solo Loop, as it was more comfortable. As we saw in the suggested watch size, the Braided Loop is tight. Also, when accustomed to the wrist, unlike the Solo Loop, it doesn’t wear properly. Sadly, the more expensive band is the bad one of the two, especially when you realize it uses eco-friendly material, and it has a look befitting of the Apple brand.

Still talking disappointments, it’s sad that the Apple Watch Series 6 ignores the force touch capabilities, unlike its predecessors. iFixit revealed recently that the pressure gasket has been totally removed. The part might be delicate and prone to damage, we thought it could have been perfected this time, rather than removed.

The U1 chip in the new Watch 7 is the same as the iPhone Pro models to start your car, unlock your car door, or smart home. The IP6x Resistant, which is dust resistant, is a good deal on its durability. The water resistance feature is also a nice touch.

The bigger screen that comes on the Watch 7 makes a lot of difference, but this is for people who have older watches but want an upgrade. If you are using an iPhone, this is a good choice. It is an overall good product, but aside from the screen size, it is not much change from last year series.