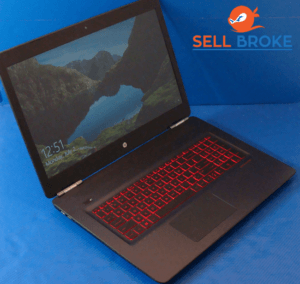 The HP Victus 16 is the affordable version of The OMEN 15. They have the same black aesthetics, design, and feel aside from the material. The Victus can be bought if you get into gaming and are under a tight budget.

The HP Victus 16 is a mid-range gaming PC with a minimalistic but sophisticated design. It comes with the recent gaming and hardware features that let you have a good gaming experience. Throughout this review, I will be looking at where the Victus is comparable to the OMEN 15, and where it falls short. Here is our look at the HP Victus 16.

Each laptop has rubber feet on the deck of the keyboard so the display can rest on it when it is closed. The gap between the OMEN 15 panel and deck makes the logo in the middle a little squishier. Both HP laptops can be opened with one hand, but the screen of the Victus is wobbly, and the hinges are stiff.

Both laptops have almost the same port selection. The only difference is that on the OMEN 15, the USB-C port is on the right-hand side and a mini display port connects directly to the dedicated GPU. On the Victus laptop, there is a:

The display on the Victus stops at the middle while the OMEN 15 can go back. Both laptops have identical intake grilles, and because of the chassis of the Victus, the keyboard layout looks more significant. The bezel sizes and thinness are the same size as the one in the OMEN 15.

However, compared to the OMEN 15, the Victus has very poor color saturation. Yet it will be fine for gaming.

It might, however, pose to be a problem with accurate colors for creative work.

Overall: Could be Crisper

The keyboard layout is also identical, and both come with a backlight. However, the OMEN 15 comes with the option of using RGB lighting. There is a full-sized numeric keyboard on the Victus, unlike the OMEN 15: where you will be getting just the end, home, and macro keys. It is usually quiet during typing and performs well overall. But it would have been best if the keyboard bounced like the OMEN 15. Yet, considering the price it came at, the Victus is a great deal.

The touchpad of the Victus is more extensive than the previous generations. It reacts well to multi-touch gestures such as drag, zoom, pinch, and double finger. The right and left click are also very functional with the touchpad, resulting in a smooth experience overall. Even with all this present, the OMEN 15 touchpad makes less noise with the same features.

Unfortunately, you may not be getting high end performance on the Victus. It comes with:

Both of the laptops get the same fan noise. But unlike the OMEN 15, you can undervolt the fan noise on the command center of the Victus. Heat is excellent on both laptops, and thermal management is fantastic. Although, on the OMEN 15, there is a bigger blade, bigger fan and an extra heat pipe that runs below the left fan on the bottom.

The RAM is upgradeable up to 64GB on both laptops, though the OMEN 15 uses the rank 8 memory while the Victus uses the rank 26. They both have two slots for NVMe SSDs. The ONLY difference is you can use a PCIe Gen 4 into the Victus Intel CPU for faster read and write speed.

The battery size is identical on both laptops. The 71Wh battery lasted for about 4 hours on the Victus, compared to a 3 hour of use on the OMEN 15. This fell below expectations because most Ryzen processor laptops offer better battery life. So, to uninterruptedly game on either laptop, you need to use it on constant power.

Overall: ON PAR WITH ITS PREDECESSOR

While the panel quality, color saturation, and wobbly display may be a problem, the Victus is a good laptop for the price range, especially for a new gamer. If you want a better option that is light, durable, and with a better display, you can go for the almost perfect OMEN 15. Particularly if you cop an excellent deal. But if not, the HP Victus 16 is a great laptop for an affordable price.

For more on the latest tech, or replacing your old tech, visit sellbroke.com.