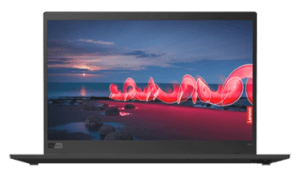 The ThinkPad X1 carbon is one of the longest Lenovo laptops available in the business-class laptop series. It comes with a double hinge design, improved Dolby Atmos, a larger and better touchpad. The lightweight laptop weighs 2.5 pounds.

The Lenovo ThinkPad X1 Yoga comes with a thin aluminum chassis. Unlike the previous models, this one is in a grey color. You can use it as a tablet, although it gets heavier after a long time. The hinges are pretty smooth, and due to the quality of the chassis, you don’t have to worry about fingerprints stains.

You can easily convert it into a laptop or a tablet. Even at small angles, the lid stays secure in its position.  On the top base of the laptop, you get the power button. It is unlike the previous generation that had theirs on the side. The button also has an efficient fingerprint scanner.

Every one of the four 14-inch screens offered in this ThinkPad comes with a 16:10 aspect ratio. Although it has a higher resolution, the panel is a lower model. It has excellent picture representation, but the colors are not as precise as they should be due to the matte surface on the glossy screen. This can make using it in the outdoors kind of hard.

The contrast ratio of the Lenovo ThinkPad is 1900:1 and a brightness level of 404 cd/mf 404 cd/ m². There is no PWM flickering, but ghosting on dark surfaces and time of response can turn out to be slow.

The keyboard is still the same as the previous generation with its 1.5mm key travel. But because the keys are not very bouncy, it could make typing experience a chore. The illumination of the background has just a color, and the F keys are higher than most. The keypad is better than most in its class, and it has an identical color to that of the chassis.

The 11.1 cm trackpad is larger than most. It has excellent handling, and with its smooth surface, you get a fantastic gesture ability and great gliding. The clicking sounds are quiet, and the pad was carefully built into the structure of the laptop itself. It is suitable for cursor movements when you do not want to use its dedicated keys.

Like most modern touchscreens, the touchscreen is reliable; it can be used for specific inputs. It comes with a chargeable touchscreen pen that works comfortably. So, you can use it whenever you want, but you can also get a stylus pen if you want something bigger and use it more often.

The Yoga comes with a core i7-1165G7 and a tiger lake generation quad-core that can run for up 4.7 GHz. It has a cooling system that can last for a long despite its power-limit CPU consumption.

Aside from the processor, the laptop also comes with two i5 chips. Running on four cores, the Thinkpad x1 has no restriction on the consumption of CPU WITH PL1 and PL2 set at 64W.

It is great for productivity, and the multi-tasking happens at ease.

The multimedia tests let the ThinkPad x1 yoga run for about 15 hours due to the improved video decoder. Charging it to a hundred percent takes about two hours when it’s in use and half of that while it is off.

This convertible laptop is excellent and impressive; it has wonderful build quality, modern specs and ports, a friendly interface, and better performance. And even though its predecessor has a better keyboard unit, the ThinkPad x1 yoga g6 keyboard is impressive. If you want it bad you can sell laptop that you own to us for cash and buy the new Yoga.

It has a friendly 16:10 panel that we like, a lovely matte panel and an extra vertical space. It comes with great speakers and an excellent keyboard- even though the previous generation is better. Hopefully, changes are made for the best in the more recent ThinkPad’s to come.

The reservation about this laptop is the not so good battery life. And although for a laptop with bright 4k, it is not entirely bad but because of many laptops in its range, it could be better.