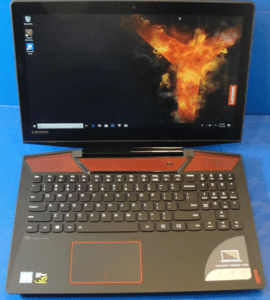 The Lenovo Legion 7 is an excellent gaming laptop that does well with the basics. It also offers top-class performance and a beautiful full-HD display that provides support for Dolby Vision. However, the pricing is a concerning factor as there is a feeling that it doesn’t offer as much as the price suggests.

The RGB lighting, powerful components and fast display are all features that make the Legion 7 a great gaming laptop. A poor battery and some screen flex are some of the cons of Legion 7.

Gaming laptops have gradually become more subtle over the years. They have now become more fitting in the office due to the reduction in size and lightings compared to the past. However, the Lenovo Legion has gone in the old direction, having more light than we see in recent gaming laptops. The aesthetics that are gradually being abandoned all come back with the Legion 7.

The RGB lighting on the keyboard glows vibrantly with a combination of several colors. On the exterior, you can see lights shining out through the vents and ports.

For some users, the lights could be overbearing. There is the option to deactivate the RGB lighting for users who are not comfortable with it; the protruding vents still show how chunky it is. The thickness measures 20mm, and it is pretty weighty at 2.1kg. However, the power justifies the size. It still fits into the bag if you want to move around with it.

The body is an all-metal design with a classy look on the first view, but you will spot some flex when you push the screen’s bottom.

The Legion 7 has a 15.6-inch IPS panel full-HD display and a 240Hz refresh rate. However, it doesn’t make a 4K option, but that doesn’t count for much as the refresh rate has more effect on gaming than the screen resolution.

The brightness is excellent, peaking at 552 nits and a good contrast ratio of 1236:1. The colors are punchy and bright; the color temperature (97480K) makes the display look cooler in natural light, with blue tints on the white background. However, it is not a major issue, but it noticeable during gaming.

The display means it can do some creative work, with a 99.8% sRGB and 97% Adobe RGB. Compared to most gaming laptops, the accuracy of colors in photography and digital artwork is commendable. If you don’t find it appealing you can trade your laptop for cash and pick up another one.

The Legion 7 has a lot of power. The Nvidia GPU selection is great, from RTX-2080 Super to GTX-1660 Ti. No matter the model you buy, you will be getting yourself a gaming laptop with so much power.

It has the 10th Generation Intel H-Series, and 32GB of RAM to help things run smoothly. The Legion 7 can run any game on its full-HD screen, and the refresh rate also helps the performance. The 1TB SSD is speedy.

The Legion 7 has loads of radiating keys and different color options. However, the lighting can get too much, as Lenovo still has a long way to go to customize RGB lighting in keyboards.

However, the keys perform well, and the travel is good on each press. The keyboard fits nicely into the deck, as Lenovo tries its best not to shrink the number pad by moving them down a bit. However, the arrow keys that sit beneath the spacebar looks somewhat odd.

The touchpad is wide and responsive. Lenovo, however, moved it away from the middle to the left side. This position might be uncomfortable, which means you are better with a gaming mouse.

There is a variety of ports available for you to use on this model. The ports are located on the left, right and rear positions. They are ranging from a Type-A USB port, a Thunderbolt 3 Type-C port, an Ethernet, the HDMI, and the headphone jack. Those options are good enough for a gamer.

Gaming laptops are known for their poor battery life, as they have too many high-powered components running at a fast rate. The Legion 7 falls short of the usual three hours we expect. It only lasted for two hours before it needed another charge.

It will become worse as you play more games, so it is best used in the form of a desktop at home.

The Legion 7 is an excellent gaming laptop, as it has a couple of solid areas like the display, the GPU, and the RGB lighting for users that fancy it. However, the price range is a bit too high for its overall output. There are other options like the Blade 15 and the Omen 15 that offer better value.

The battery life is incredibly depressing, and it feels like Lenovo held back a little with the Legion 7.