The Best Mechanical Keyboard To Ever Exist Now On Alienware 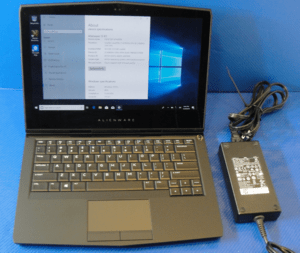 Alienware refreshed the m17 R4 and the m15 R4 in January. They included the latest GeForce 30-series graphics chips from Nvidia. But the most significant upgrade was the introduction of the Cherry mechanical keyboard, which is ultra-low-profile. These gaming laptops maintain other specifications like the 10th Generation Core i7-10870H and Core i9-10980HK Intel processors and 32GB DDR4 memory.

The Cherry on top of the package

The MSI GT80 (18.4-inch) first featured Cherry’s mechanical keys some years ago. However, the issues with it were the size, thickness, and weight. The GT80’s price also meant that most users couldn’t lay hands on the Cherry keys. Cherry went back to make modifications and now have finally come out with the specially made mechanical keys to compliment the ultra slim laptops that already exist and widen the reach to gamers.

The mechanical switches of these laptops feature a slim 0.6mm board design which is about six times slimmer than the regular Cherry Red switch. The DeLorean’s gull-wing doors inspired the manufacturers. The technology behind this differs from the butterfly and scissor keyboards due to the spring mechanism and individual parts. According to Cherry, the expected lifetime of the mechanical keyboard is up to 15 million keystrokes-per-key, which is likely to outlive the laptop’s lifespan.

The travel of the mechanical keyboard is only 1.8mm as opposed to the 2.0mm key travel on the Cherry Red switch and 2.2mm on the Blue switches. Cherry has said that there will be no color code assigned to the latest switch for now. However, it is comparable to the Blue switches on the desktop for both characteristics and feedback. It also supports the anti-ghosting and n-key rollover that is present in good keyboards.

Dell has pulled off a major move with being the first laptop manufacturer to have the latest Cherry keys. What makes this even more impressive is how the m15 G4 (15.6-inch) and the m17 G4 (17.3-inch) maintain similar chassis skeletons to their G3 counterparts. Dell didn’t have to make adjustments on the thickness for both laptops to accommodate the Cherry keyboard. However, the weight might differ from one generation to another, and users can configure the laptop with a non-Cherry keyboard to get lower prices.

We are yet to see how PC gamers will accept the latest Cherry keys, as earlier attempts to have specially built laptop keyboards for gaming laptops have failed to stick. Some of such attempts include Apple’s butterfly keyboard, which had quality issues, the MagLev keyboard for the 2-in-1 XPS-15 and the optical keyboard on the Razer Blade-15. The Cherry keyboard will have to hope that it sticks, as history doesn’t favor luxury keyboards on laptops.

Other laptop models are yet to have the Cherry keyboard options, as it is only available on the m17 and the m15 series for now. However, it successfully sticks; we would expect to see it in other laptop models.

Getting something effective and aesthetically pleasing is a win for gamers. The mechanical keyboard offers exactly that as you can easily customize them and the colors are nice.

Cherry’s successful implementation of the mechanical keyboard in the Alienware m15 and m17 is a big win for gamers. Shrinking the keys into a slim chassis is a game’s dream, and we look forward to playing a lot of PC games with the keyboard. New keyboard can make this model a best selling laptop for gamers this year.