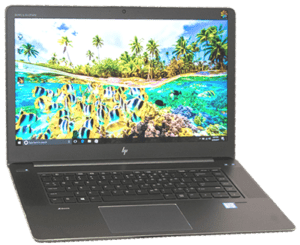 HP delivered another specialist workstation with the ZBook Studio G7. The portable laptop harbors more power than it looks, but it falls short on the productivity side. HP decided to go for the Quadro graphics chip, an office-oriented chip, and that’s the significant difference between the ZBook Studio G7 and the ZBook Create G7. The similarities exist in different features such as the elegant chassis, the keyboard, and the audio.

Although the ZBook Studio G7 might not be a user favorite due to the pricing and fewer configuration options available for the display, the ZBook Studio G7 is a good option for specific fields. Yes it's pricey, but now you can trade laptop for cash with us and use it to buy a new one.

Despite the power of the ZBook Studio G7, it has a minimal, sleek body that makes it a good fit for your workplace. The shiny silver matte body has a Z logo reflecting on the lid and the small vents on either side. The ZBook Studio G7 has a premium look, but its performance is where the strength is.

There is a fingerprint sensor on the right side of the keyboard. And a Bang and Olufsen speaker above the keyboard.

HP upgraded its workstations with the ZBook Studio G7’s Quadro graphics chip. Although the Quadro isn’t great for gaming, it delivers well in work-related tasks. We tested the version with the Core i7 -10850H processor from Intel, 32GB of RAM, 1TB SSD, and the Quadro RTX-3000 from Nvidia.

The ZBook Studio G7 didn’t do so well on the general performance test (the Geekbench test), scoring only 6137 points. The transfer speed test fell behind with only 809MBps, which was slower than some laptops in its category.

However, the ZBook Studio G7 performed well for specialized work programs, mainly in the architectural field.

The ZBook Studio G7 features a 15.6-inch screen with a 3840 by 2160 highest possible resolution. However, the version we tested had 1920 by 1080 resolution with anti-glare technology. When put to the test, the display showed some poor viewing angles, going dark when viewed from other angles other than the front.

The ZBook Studio G7 has the highest peak brightness in its category, with 809.2 nits. However, that fell short of the 1000 nits advertised by HP. The colours are not the best, but you will hardly notice as the brightness covered up.

The keys have a cushiony and comfortable feel, coming in membrane-chiclet style. Although the keys can slippery occasionally. Membrane keyboards do not have the best essential travels, but that of the ZBook Studio G7 travelled well, and it has a bright backlight. Another bad thing about the keyboard is the arrow keys, as they don’t come in full size.

The touchpad is a precision touchpad with zero issues. It measures 4.5 by 2.8-inch which is quite large, and it has excellent friction for precision. The multitouch inputs such as scrolling, zooming, and quick swapping are all great.

The ZBook Studio G7 is not the best for connectivity, as it doesn’t have the full compliments of ports. On the left, there is one Type-A USB port, a Kensington slot, and a microphone/headphone jack (3.5mm). On the right, there are two ports for Thunderbolt 3, one SD card slot, a connection for Mini DisplayPort and the charging port.

Unlike other workstations, battery life is awe-inspiring on the ZBook Studio G7. When the battery was put through the test, it lasted for over 8 hours. Most of its competitors often stay around the 5-hour mark.

The ZBook Studio G7’s appeal is dependent on the work you need it for. The configuration also plays a significant role in how well it performs. As for the looks, it is sleek, and it weighs moderately. If you want to run heavy graphics on specialty programs, then the ZBook Studio G7 is for you due to the Quadro graphics chip.