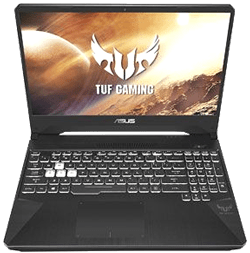 The best combination of decent pricing and elegant chassis is what you get with the Asus TUF Dash F15. It delivers a powerful performance in its lightweight, helping you to move around without weighing you down. It also has a strong and long-lasting battery, more than what you get in an average gaming laptop.

Asus broke the price barrier with the TUF Dash F15. Usually, lightweight gaming laptops are more expensive compared to traditional gaming machines. However, Asus has made this possible for about $1,000 as a start point.

Although there were some compromises that Asus made for the TUF Dash F15 to work at that price. The absence of the webcam is probably the biggest compromise. Although this is not the first time that Asus has made such a compromise in their gaming laptop.

The TUF F15 might be a budget lightweight gaming laptop, but the design looks nothing like that of a budget laptop. It weighs only 2kg and has a thickness of 0.8 inches, which gives it a premium feel for a gaming laptop. It has an aluminum lid and keyboard deck with a gorgeous gray color, which means it is quite sturdy despite being portable.

However, the bottom is made from plastic, making it fall short of a total expensive body design. The plastic bottom enables you to open the back when you need to service the laptop.

The display on the TUF Dash F15 is great for esports. The display has a 240Hz refresh rate, and it has a FullHD panel (1920 x 1080 pixel). The peak brightness is about 265 nits and it hit 110% sRGB spectrum.  Its 3-millisecond response is well-rated, and it has an adaptive sync technology that eliminates frame tearing. The bezels are not the thinnest but it doesn’t have a thickness that distracts.

The display panel is IPS, with broad viewing angles and it has a matte surface that kills glare.

The TUF Dash F15 does come with the latest processor from Intel and graphic chip from Nvidia, but it is configured such that it can handle the performance in its tiny form. This means that the TUF Dash F15 is not the fastest RTX-3070 PC in the market. Although it could still play all forms of AAA games regardless.

The processor performance is not the strongest around, majorly due to the Tiger Lake-H35 CPU that was included. This processor is good enough for all forms of gaming, boosting up to 4.8GHz but it is not the best for creative that wants to combine a workstation and a gaming laptop in one.

The keyboard on the Asus TUF  is quite comfortable for typing, as it has a lot of key travel, despite the laptop’s thin build. The spacing between the keys is also great, but the lighting could have been better. There is the absence of RGB lighting, with Asus opting for the teal backlighting instead.

The WASD keys are clear, making them suitable for gaming. Despite the clear keys being great for gaming, it doesn’t look the most attractive on the laptop.

The dedicated keys sit well at the top of the keyboard, and they are very useful. The volume is easy to control, avoiding the awkwardness of the controls being stuck between the function keys and the Fn key. There is also a button dedicated to mute the mic, and another for opening the Armoury-crate software from Asus.

The touchpad is also good, and it is sturdy enough. Although you might not use them a lot as this is a gaming laptop. Most gamers would rather go with a gaming mouse.

There is a rich range of ports in the TUF Dash F15. On the right, there are two USB Type-A ports, while there is another USB Type-A port on the left, as well as an HDMI, a Thunderbolt 4, a charging port, Ethernet, and a combo jack (3.5mm).

Gaming laptops are not the best when it comes to battery life. Although we have seen some improvement lately in this regard, and the TUF Dash F15 comes even stronger with 10-hour battery life. This is despite the fast display and the powerful graphics chip.

The Asus TUF Dash F15 is a cheap gaming laptop that delivers above its price range. Although the absence of a webcam might have lessened the value a little bit, power and mobility are important assets. If you don't like it you can trade in laptop for cash with us and pick up another one.