The Most Powerful Gaming Laptop in 2021: Zephyrus 15 SE 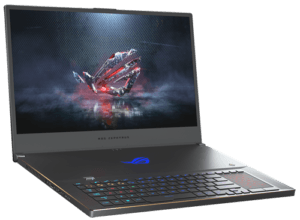 Asus did well with the Zephyrus GX550 last year. It had a magnificently designed dual-screen design, and it was quite functional. This year, Asus has chosen to step up with the GX551, also known as the Zephyrus Duo 15 SE the latest entry into the lineup, starts at $2,199 and features the Ryzen 5000 processor from AMD and the GeForce RTX-30 series from Nvidia. This helps it to deliver better gaming and media performance.

Also, another impressive feature about the GX551 is its lesser base price than its predecessor despite additions and tweaks that bring about more improvement. The Zephyrus Duo 15 SE might be costly in terms of general price but its uniqueness and appeal help it stand out as a gaming laptop. Some might argue that the second screen is still a luxury and not necessary but its usefulness for those that need it is obvious.

The build and design of this model are a lot like the original version, but it is still unique in some ways. The dual-screen is an exquisite feature especially as the execution is top-class. The portable and slim build of the laptop houses this dual-display perfectly.

The second screen, called the ScreenPad Plus, sits between the main screen and the keyboard. It also has a full touch capability, working perfectly as an external monitor.

It comes with two displays. A primary screen and a secondary screen sitting well in front of the keyboard. This display easily outclasses that of most gaming laptops. Both screens also offer 4K resolution and that is very impressive. The primary display clocks 120Hz while the second runs at 60Hz.

The display is well set up for gamers and content creators. The color accuracy is great and it supports FreeSync.

The Duo 15 SE features top-class hardware. It has the RTX-3080 Nvidia GeForce GPU, the Ryzen-9 5900HX, 32GB DDR4 RAM, and two 1TB SSDs. The lovely thing about these hardware features is that they do not make the Duo 15 SE bulky in any way.

The Ryzen-9 5900HX runs at 4.5GHz according to Asus, but it does better with regularly boosting up to 4.591GHz. The Dynamic boost present in the RTX-3080 GPU also helps it draw more power than you would expect.

With this sort of power, it conveniently performs better than almost every gaming laptop currently in the market.

The keyboard and touchpad took a bit of a hit due to the presence of the second screen. The keyboard had to move to the front edge for the screen to fit in. it doesn’t affect the usability but there is no space to rest your wrist while typing. The keys are backlit individually, and you can customize each one the way you want. The feedback is good, so is the travel distance of the keys.

The touchpad took more hits than the keyboard citing the same issues caused by the second screen. It sits compressed in a narrow layout at the right-bottom. It might take some time for you to get used to it. For Gamers, an external mouse would be better. However, it comes with the unique feature of being able to change into a numeric pad that is LED-lit when you press a button in the top-left corner.

The connectivity range is quite good. On the left side, there is the headphone jack, power connector, and MicroSD card slot. On the right side, there are two Type-A USB 3.1 ports and a USB-C port.

For the rest of the ports, you will have to go to the back. This might be due to the cooling vents located at the rear of both sides. At the back, there is the HDMI output, the Ethernet jack, and a Type-A USB port.

The port selection is quite solid.

The battery life is very good giving the level of performance it delivers. It records an additional 101 minutes of battery life compared to its predecessor. The battery is a 90WHr battery.

The Zephyrus Duo 15 SE improved a lot from its good predecessor. The display got better without having to let go of fluidity. The GPU and CPU produce powerful performance and the battery life even gets better.

The only issue might be the weight for some users, but if you consider that you are getting a desktop-level performance, it will make a lot more sense. If you don't like it you can sell your laptop to us and move on to another one. The Zephyrus Duo 15 SE is the most powerful gaming laptop you will find in the market right now.