MSI GE66 Raider: A Give and Take Situation 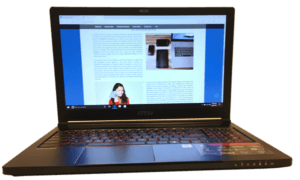 If you have ever been curious about how flashier gaming laptops will look, the MSI GE66 Raider is here to show you how. With a gaming laptop with a gorgeous RGB bar sitting below the keyboard, a trim design, and an aluminum build, you will fall in love with its look. The price reflects its premium looks as the base model costs $1,899.

It is not all about looks alone as it comes with enough power with its Intel 10th Generation Core i9 processor and the Super Max-Q RTX 2080 graphics card. These specs surely complement the awesome 300Hz display. Esports lovers will be licking their lips on this one.

The case of the GE66 is a laptop that manages to combine a very mature look with a wild look than what you will get in the usual gaming machines. It does this by coming in a classy and cool chassis sitting on top of a magnificent RGB bar. Certainly, the GE66 is not the first laptop to use colorful LEDs for its deck but it can be argued that no one has done it better.

The GE66 weighs averagely for a 15-inch gaming laptop. Weighing 5.3 pounds and measuring 14.1 by 10.5 by 0.9 inches – the GE66 Raider is the same weight as the Zephyrus Duo-15 but weighs more than the GS66 Stealth. The bezels are thin at 5mm, and it comes in a screen-to-body ratio measuring 82%. This gaming machine is a combination of premium and fun.

The image quality in the GE66 Raider sees it pack a good level of color for movies and gaming. When used to play games like Mission Impossible and Overwatch, the look was as pleasant as expected, with every detail coming out in the right color.

It has good side-angle viewing with its IPS Style panel. It maxed out at 300 nits of brightness but it is not the brightest if you compare it to other laptops in its category.

The GE66 Raider is powered with the 10th Generation Core i9 processor and the Super Max-Q RTX 2080 graphics chip. The CPU has 16 threads and 8 cores, 32GB RAM, and 1TB of SSD. What it packs is an enormous amount of power that simultaneously opened over 20 chrome tabs while streaming and opening SellBroke app.

For gaming, the reviewed unit reached 60 FPS with ease for most games. The speed of processing was also great in most activities including video transcoding and copying files. It copied 25GB files in 36 seconds at a speed of 745.8 MB per second.

The GE66 Raider is a trimmed gaming machine but this comes with the price of an expansive keyboard. MSI announced that the keycaps in the GE66 have been enlarged from what we saw in the GE65 Raider. But we found some navigational keys still choked on the right side of the keyboard, with the arrow keys not being easy to locate.

This caused the keys to be closer than expected while being flat, which ultimately affects the typing experience as you can easily press other keys without the intention to do so.

For functionality, the keyboard is up there. You can control the RGB brightness with one button and switch between different modes with ease.

The touchpad is quite good with the right level of control. It also comes with the Windows 10 touchpad gestures.

The battery life in this gaming machine is good enough, even better than most in the category. There are a few better ones but it sure holds its own, lasting almost 5 hours after a single charge. The level of performance it produces further justifies the battery life.

MSI GE66 Raider is a gaming laptop full of power and has a stunning look. High storage, powerful GPU and CPU, and slim bezels are what defines this gaming machine. The awesome 300Hz refresh rate even makes it better. Consider MSI laptop trade in if you want to upgrade to the newer model.

Although, it doesn’t have the brightest display and that is the only major downside to it. The GE66 Raider places itself among luxury and premium gaming laptops and justifies this inclusion.