What To Expect From The Refreshed Asus Laptop Lineup 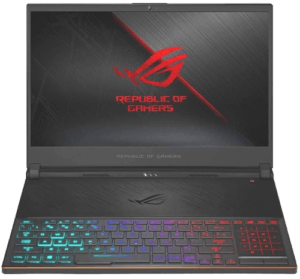 Asus ROG (Republic of Gamers) introduced its latest set of gaming laptops for the year. This laptop set is quite varied, cool-looking, and eclectic. In this lineup, we are excited and curious about the ROG Flow X13. This laptop is a first of its kind, a convertible 2-in-1 gaming laptop from Asus. You can’t go wrong with any of the new models. And if you do you can easily trade in your laptop for cash with us and buy the one you really want.

This is not a common occurrence, and it could be a hit or bust from Asus. The Flow X13 looks nothing like your typical gaming laptop. Its 13-inch display makes it quite portable that it can fit into any kind of setting. The battery life is great according to Asus, as it is reported that you can have about 10 hours of streaming video on a full charge. The USB-c charger which is 100 watts, can deliver up to 50 percent charge in 30 minutes.

For display, you have the option of the 3840 x 2400 touch display or the 120Hz FHD touch display. Using either of them will give you a 16:10 aspect ratio and more vertical space that helps to multitask.

Taking a look at what is inside might make things a little more complicated. The Flow X13 features the AMD Ryzen 9 5980HS processor at the highest level, and this is a good thing as it is a gaming PC. The GPU is where things get a little disappointing, as this powerful CPU was paired alongside an entry-level GPU in the GTX 1650. When you look at the power of the 5980HS, you will not be wrong to feel it deserves a better GPU.

If this were a normal work laptop, the GPU and CPU combination would make more sense. But for a gaming laptop, it could do better. However, the Flow X13 has a unique partner in the ROG XG Mobile. The external GPU is portable and easy to carry around. Per Asus, the XG Mobile will offer a desktop-level gaming performance and will double as a power adapter. Together with the X13, it cost about $2,999.

Still, on this lineup, another headliner unveiled is the ROG Zephyrus Duo 15 SE. This new Duo 15 SE is a refresh of the Zephyrus Duo 15. It has a dual-screen, which is one regular screen and the ScreenPad Plus. The regular screen comes in either 300Hz or 120Hz FHD Panel and is a 15.6-inch, 4K screen. The ScreenPad Plus is located at the top part of the keyboard deck, and it is a 14.1-inch touch display. It comes in two resolution options, the 1920 x 550 or 3840 x 1100 resolution.

The way it is built means that you can have different displays running at the same time on either screen. The top screen could be running a game, while the bottom screen could be displaying a chat. Although, the experience of the previous Duo 15 shows that the game you are playing determines how well you can do that.  Asus however has revealed that there is ongoing work with companies and game developers like Adobe which will help develop unique content for the screen setup.

The major update to the latest Duo 15 is the power and cooling module. It has the AMD Ryzen 9 5900HX paired with the GeForce RTX 3080 GPU from Nvidia. The cooling module is the latest Arc Flow design which can dispel about 165W of processor power. There are up to 32GB of memory available, and storage of 2TB max.

Finally, the Strix Scar 17 and Strix Scar 15 are the latest additions. There is a lot of new features on these models. They both have the optical-mechanical keyboard, which is the first for a Scar model. They have an increased screen-to-body-ratio, bigger battery, upgraded cooling system, Type-C charging support, and quad speakers.

On the Scar 17, you will find the fastest display on a laptop in the 360Hz panel option. Both models have the new Nvidia and Ryzen chips, as you can get up to the GeForce RTX 3080 and Ryzen 9 5900HX. Esport players are getting good machines. These models will reach North America in the first quarter of 2021.

The Strix 17 and Strix G15 are also coming to the market. These models are lower-key Strix models built for esports players that are not so serious. They have the Ryzen 9 5900HX processor options but peak at a GPU of GeForce RTX 3070 and a 300Hz refresh rate screen.

These new models from Asus are a part of the many gaming laptops announced as a result of AMD’s release of the Ryzen 5000 processors and the RTX 3000 Nvidia GPUs.