What To Expect From The Asus ROG Flow X13 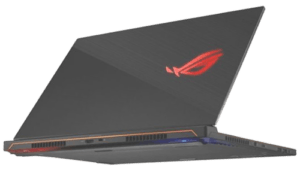 Asus announced the ROG Flow X13 at the CIES. This gaming laptop is a 13-inch convertible and works with the external GPU (eGPU). The Flow X13 might have a small frame, but it houses a lot of power with its Nvidia GeForce GTX 1650 GPU and the AMD Ryzen 9 5980HS CPU. This is unique, as the Flow X13 is the only product like this to have such hardware. With an option of up to 32GB of RAM, a commendable 62 Wh battery, and a cooling system, the Flow X13 has huge prospects.

As stated earlier, Asus launched the Flow X13 with the eGPU. This is called the ROG XG Mobile external GPU. It is a compact GPU built in a way that it cannot be upgraded, and it comes preconfigured. Due to its compact form, it can easily fit into a bag and carried around. However, it doesn’t come cheap.

Also, Asus built the ROG XG Mobile in a way that it can only be used alongside the Flow X13. It doesn’t have the standard connect which is Thunderbolt, rather its unique connector for reasons best known to Asus.

In this post, we take a look at how well you can expect the ROG Flow X13 to perform. Although these are early days, and we can discover new things about this ultraportable gaming laptop that we love or dislike.

The Flow X13 has the option of two panels for its 13.4-inch sized, 16:10 touchscreen display. The panel options are the 60Hz refresh rate, UHD+ panel with wider-gamut colors, and the 120Hz refresh rate, FHD+ 100% sRGB panel.

The FHD+ panel is budget-friendly compared to the UHD+ panel. It is also more versatile, efficient and works better for gaming with a higher refresh rate. The UHD+ however seems to be better suited for content creation. Although, there seems to be a little issue with response time in the FHD+ panel, something we are still paying attention to.

The screen brightness maxed out at 350 nits, and the contrast levels were over 1800:1. The Flow X13 also has the webcam placed atop its screen, a feature you wouldn’t find in recent Asus laptops. There is no IR and any other type of biometrics on the Flow X13.

The touchpad is fairly small and it has a feel of glass. It is also good enough for daily use, with a good response rate and travel speed.

The keyboard on the Flow X13 is quite responsive, easy to use, and accurate. The full layout is nice and the spacing between the keys is wide enough to make you feel comfortable while typing. The keyboard is backlit, and it has averagely bright white LEDs.

However, the one complaint we have with the keyboard is the plenty of light that comes out from under it. Although this can be expected given how slim the laptop is.

The audio is also good enough for this class of laptop. It is loud enough, the quality is averagely good, and it is not distorted at the highest volume.

The Flow X13 processor is the AMD Cezanne Ryzen HS 5000, and it has a GTX 1650 graphics card from Nvidia. It combines both of these with a max of 32GB LPDDR4x memory and the NVMe SSD storage.

The graphics chip is an entry-level one but you can play AAA FHD+ games on it while at medium setting. The AMD Cezanne is perhaps the most [powerful you will find for a laptop of this size.

The Flow X13 has a dual-fan cooling design, and this is the Arc Flow fan that has asymmetrical blades – airflow increase to about 13% with no noise.

The XG Mobile is an external GPU that can only work with the Flow X13 as of now. The reason for this is that the connector is not the usual USB-c port, but an XG connector that allows the 8x PCIe connection for GPU and a USB lane for USB accessories and charging the PC. This connector ensures that there is enough bandwidth for the GPU to erase any issue on the laptop’s display or external screens.

The size of the XG Mobile is also an advantage, as it is easy to carry around.

The ROG Flow X13 makes a good first impression. If the pricing is okay, and the Asus finds a way to balance the thermals, performance, and noise levels, this could be the new ultraportable performance king. If the price is too steep you can trade your old laptop for cash with us and use it toward the new Asus.

The idea of the external GPU not allowing upgrades is a setback in our opinion. Yes, it is portable and mobile, but the idea of being able to upgrade it would have been great.

With that said, we can’t wait to have an extended look and work with the Flow X13.