Acer Swift 3: A Perfect Blend of Quality and Affordability 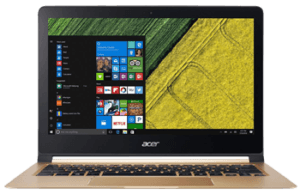 For anyone looking to get a portable laptop that can multitask and is affordably priced, the Acer Swift 3 is a viable option. While the Acer Swift comes in both an Intel and an AMD variant, this review focuses solely on the AMD Ryzen 7 4700U variant because that laptop performs like a beast.

Let us get into the review, shall we?

Undoubtedly, the best thing about the Acer Swift 3 is the internal configuration, especially with the AMD variant.

AMD has been killing it lately with their Ryzen processors, and the AMD Ryzen 7-4700U processor is no different. The Acer Swift 3 with its Ryzen 7 4700U configuration easily outperforms its Intel counterpart. It doesn’t just stop there; in many cases, the Acer Swift 3 exceeds or matches the performance of $2,000 top-tier premium laptops like the Dell XPS 13. So you can trade your laptop for the Acer and save money.

This portable laptop packs a lot of power for its compact size and is able to carry out multitasking comfortably and processes that need fairly high processing speed. At the price of $650, it is hard to find another laptop in its class that offers similar performance.

According to tests carried out on Laptopmag.com, the Acer Swift 3 was able to run Chrome with 41 tabs open, two YouTube pages running 1080p videos, a page running google docs, Spotify, Netflix, and Disney+ apps with ease. While the Intel variant of the Acer Swift 3 pulled off a Geekbench 4.3 score of 14,641 in overall performance, the AMD edition scored an incredible 19,163. To put the performance benchmark of the Acer Swift 3 (AMD edition) into perspective, premium ultrabooks like the MacBook Pro 13 with Intel Core i5 (10th Gen) and 8GB of RAM scored 18,221 in Geekbench 4.3. The highly coveted Dell XPS 13 with its 16GB of RAM and 10th Gen Intel Core i5 scored 19,053. Are you beginning to get the picture?

There is a lot of power coming from the eight-core AMD Ryzen 4700U CPU, even with the lack of multithreading.

The display is the one thing on the Acer Swift that Acer skimmed on. The display of the swift 3 is. 14-inch Full HD screen that isn’t the best seen on a laptop of its price but considering the kind of performance you get from this machine, the subpar display comes as no surprise.

The 14-inch display on the Swift 3 is dull and has a less than average brightness and color accuracy for a laptop in its class. The Swift 3 was only able to represent 62% of the sRGB color gamut, which is way less than the category average of 91%, and 4% less than that of the Intel variant.

While the Acer Swift 3’s display is good enough for movies and presentations, it is not recommended for anyone that is heavily into photography and photo editing.

The screen has a brightness of 251 nits but doesn’t come close to the incredibly bright and accurate screen of the HP Envy 13 with 387 nits of brightness.

The keyboard of the AMD variant of the Acer Swift 3 is more attractive than the one found on the Intel variant. A silvery key layout characterizes the keyboard with undertones provided by the white keyboard backlight.

The Grey letters on the silver keys can sometimes be difficult to see as it lacks in the contrast department. In terms of feel, the keyboard of the swift 3 provides springy feedback that mimics that of a mechanical keyboard to the barest degree. It is hard to dislike the keyboard of the Swift 3, especially if you don’t have to look for the keys before typing.

There is nothing special about the TouchPad of the Acer Swift 3 as it provides a wide enough real estate for scrolling and other Windows 10 gestures. The surface of the TouchPad feels rough and grippy when used, just something you should know beforehand if you prefer smooth surfaces.

At the price that the Acer Swift 3 with the AMD Ryzen 7-4700U processor comes with, it is hard not to recommend this machine. The only people that should write off this Ultrabook as there are slightly more expensive Ultrabooks out there with way better screens are those that need it for creative tasks. However, if a machine that can multitask and last for up to 11 hours is what you seek, then grab an Acer Swift 3 from the closest store.