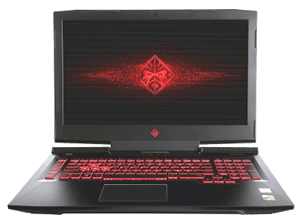 The HP Omen series has seen many changes in design over the years, and the 2020 Omen 15 is no different. It brings a fresh take on the design of a mid-tier gaming laptop in terms of look and performance.

This is a review of the AMD powered HP Omen 15. Is it better than the Intel version?

The new 2020 design strays far from the extreme gamer look that its predecessors used to flaunt. One could say it looks like the Omen 15 took a break and went to business school. Laptop features squared edges with no color accents around the cooling grills and a clean dark grey finish. The new logo is less Alien and more of a small reflective square flipped on its side. The Omen 15 would be the definition of a clean looking gaming laptop if there were ever one.

While the laptop looks clean, it still gives off the feel of a mean gaming pc with its robust aluminum keyboard laid on high-quality plastic.

The keyboard layout lacks a Numpad layout on the left, but it gives enough room for the keyboard keys to feel whole and tactile. Instead of a number pad, what you get is a set of full-sized arrow keys and a small navigation key cluster. Another thing that users will appreciate from the Omen 15 is the lack of flex on the keyboard's length and the energic key action of the keys. It is important to note that the keyboard only has white backlit keys.

The trackpad is smooth and offers quiet physical clicks making it a usable option.

The 8-core Ryzen 7 4800H processor is the real star. Its very impressive performance can be compared to what is expected from a $2,000 Intel-powered gaming pc.

Performance is very impressive for 1080p gaming. The Omen 15 with its GTX 1660 Ti graphics processor can hit above 60 fps at 1080p high preset in graphics-intensive games.

To test for the performance in content creation, software like Cinebench R15, PC mark, and Handbrake 1.1.1. According to the results obtained by PCMAG.com, the Omen 15 had no trouble going above 4000 points usually looked for in the test.

While the Omen 15 is a gaming pc, it shines even better as a pc for content creators. The laptop should be paired with a color accurate 2K resolution monitor to get the best out of the AMD processor and graphics card.

The screen of the Omen 15 is a good 144Hz anti-glare Full HD screen with ample brightness and color accuracy. According to Hp, it is rated at 300 nits of brightness and 72% on the NTSC color gamut. This might not be the best screen for color-accurate tasks like video editing. But the wide viewing angles and anti-glare make it good for gaming.

According to the battery test carried out on PCMAG.com, the Omen 15’s battery can last for about 9 hours and 52 minutes with the brightness set to 50% and the volume at 100. The pc was put on energy-saving mode, and the Wi-Fi and keyboard backlighting were also turned off while playing a locally stored FHD video.

On a more normal use with some of the features turned on, the battery might last less. But it's still decent enough for a gaming pc.

The HP Omen 15 is a very good gaming PC, and the only downside to this laptop is that it has only one slot for storage. One way to describe it is a gaming pc on steroids, especially for the mid-tier gaming pc that it is classified. You can trade in any laptop with us for cash. And later use it to buy the 2020 Omen. Search for a good deal as 2020 models will go on sale now.