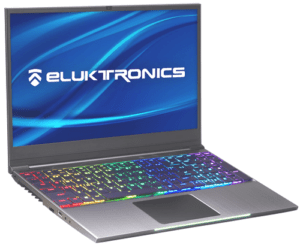 A lot of exciting new tech has been revealed this year, and we all thought there was nothing more exciting that could be made for laptops in 2020 – we were wrong. Eluktronics decided to shock the gaming world with the world’ first gaming laptops with QHD (1440p) screens @ 165Hz.

I know most readers are probably thinking to themselves that “why should we get excited over 1440p screens, we have had those for a while now.” It is not just the resolution that we are excited about; it is the refresh rate and the impressive low latency that the Eluktronics laptops have to offer.

In the past, gaming laptops with 1440p screens had to make do with refresh rates of 60Hz or 120Hz in some very rare cases but with low latency. Now, however, Eluktronics have developed laptops with 1440p screens that can handle up to a 165Hz refresh rate, and a latency of just 2.5ms, that is amazing. To top it off, the screen is quite color accurate at 100% sRGB and 87% of Adobe RGB color Gamut.

Eluktronics has announced that they will be launching three laptops with their new displays – the MECH-15 G3 QHD, MAX-14 HQD, and the 17-inch MAX7-QHD. The general configuration of the laptops is 10th Gen Intel Core-i7 processors with liquid metal cooling and RTX 2070 super GPU. For some reason, there is no 2080 version of these laptops. The Eluktronics laptops found an excellent way to leverage on the mobile RTX 2070 Super GPU to power their screens.

According to Eluktronics, the idea behind their new laptops was to make sure that gamers no longer had to choose between visual integrity and blazing performance – their laptops were designed to provide both.

A lot of gamers and power-users, in general, have expressed their concerns about whether or not the Eluktronics laptops would have the power necessary to complement the QHD screens, and hit the 165Hz refresh rate of the screen. However, the early release tests carried out by reviewers like Dave2D show that these laptops are the real deal. Dave2D was especially impressed with how responsive the screens were with the 2.5ms latency.

One very important factor in the case of these laptops is the pricing, and we have to say we are pretty impressed. The 1440p screens are only $80 more expensive to produce than regular 1080p displays while offering up to 78% more screen space, better color gamut, color vibrance, and low latency. According to early tests, the screens on the Eluktronics laptops has 100% sRGB and 87% Adobe RGB color accuracy.

These laptops are worth all the excitement as they represent a new era of gaming and laptop production as a whole. 2020 was filled with the introduction of laptops with 4K screens that had high latency, and 60-90Hz refresh rates. However, for the same laptops, the price difference between a model with a 1080p screen and a 1440p screen was about $400-$500. While there were laptops with 1440p screens already on the market, these laptops never really seem to be a first or second choice pick for potential buyers.

The introduction of the 1440p screen with a 165Hz refresh rate and 2.5ms response time seems to be the push that the computer manufacturing industry to standardize 1440p screens on gaming laptops.

The new 1440p from Eluktronics have a brightness rating of 318 nits but lack HDR support. The only downside, for now at least, is that the least GPU that can be in a laptop with the QHD screens is a NVIDIA GeForce RTX 2070. All of the new laptops from Eluktronics will come equipped with the super variant of the NVIDIA’s 2070 GPUs to make sure they can power the screens effectively.

The QHD screens from Eluktronics seem like a huge turning point for gaming laptops, and we are so ready for this shift. Are you? If so trade your old laptop with us and gather cash to purchase a new one.