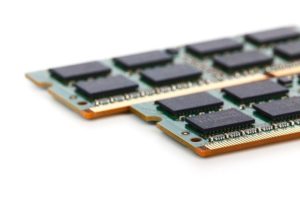 The effect of increasing the memory RAM of a laptop has been a controversial topic for quite a while. The question is how much will it affect the performance? It is definitely one of the steps to take to upgrade your laptop for gaming.

RAM is an acronym for Random Access Memory. It is a type of volatile memory that is incredibly fast and allows the processor to retrieve information faster than if it was sitting on a hard drive. The catch is that while a RAM is faster than physical drives like the hard drive or a Solid State Drive, its capacity is not as large as those of other physicals drives.

Most 2020 laptops come with at least 6GB of RAM and support 32 – 64GB of RAM. You can see your RAM as the workshop table on which your processor performs all of its operations, and the RAM holds all the tools and materials for easy access. The SSD and the HDD are like shelves and lockers for storing items; it takes longer to access them.

Performance of a RAM

The performance of your RAM is affected by the RAM’s speed and capacity. Generally, if your RAM’s speed is at least 2400MHz, and its size is up to 8GB, your laptop can run almost any game on the market with ease.

The generation of the RAM also matters. A DDR4 RAM is quite faster than a DDR3 RAM. While many DDR3 RAMs start at 1666MHz, DDR4 RAMs start at 2400MHz and can range up to 5100MHz in some models.

The role of the CPU

The Central processing unit (CPU) plays a significant role in determining how fast your laptop feels. For instance, increasing the RAM of a 5th Gen Intel Core i3 CPU to about 32GB will not give it a significant performance boost. This is because of something called “bottlenecking” in computer terminology.

Bottlenecking occurs when one or more units of the processing chain in a computer are more powerful than a unit that comes before or after it. The powerful unit’s performance gain will be nullified due to the limitations of the less powerful units.

In the Core i3 example, if the RAM is increased to 32GB, the 5th Gen Intel Core i3 can only do so much work at once. Therefore, the processor is the unit causing a bottleneck in the processing chain. This will especially be true if the laptop also comes with an SSD, which is faster than any hard drive unit.

In what cases does an increase in RAM increase Performance?

If your CPU is a very powerful processor like a 7th Gen Intel Core i7 Xtreme edition, and you have a powerful graphics card like the Nvidia GeForce 2080 installed, but your computer only has about 8GB of RAM. Increasing your computer RAM, in this case, would give your computer a significant boost in gaming and content creation applications like Adobe Photoshop and After Effects.

The second most common cause of seeing a performance boost after more RAM is installed is if you mostly work with applications like Photoshop, After Effects, Illustrator, and more but have an average CPU, GPU, and say only 4 to 6GB of RAM. Increasing your system’s RAM to about 12Gb, for instance, would lead to a noticeable improvement in latency and render times.

Therefore, depending on the task, you intend to carry out with your laptop and the type of CPU and GPU that powers your laptop’s operation, a RAM increase can either increase your laptop’s performance slightly or not at all.

For content creation, video editing, and rendering, the minimum RAM size recommended is 16GB of DDR4 memory. For gaming, since it is 2020, and why not, the minimum recommended RAM size is 12GB of memory. Depending on the type of motherboard that comes with your laptop, especially if your laptop is a high-end laptop, then the RAM can be increased to 64GB of memory to use all the processing power with no bottlenecks involved. You can trade laptop for one with more memory if you can’t simply upgrade it.