Xbox One X Vs Ps4 Pro

Regardless of what console you prefer, it is safe to say both the PlayStation and the Xbox One X are awesome devices and that offer incredible games. However, many people still wonder which console is worth their money and why they should even consider getting one at all. We hope this article can answer some of these questions for you.

It is no news that both the PS4 and Xbox One have lots of third-party games supported by both platforms, as well as gaming laptops. Therefore, you can be sure that a lot of the titles that you love would be coming to either console. However, the console war is more about games that are exclusive to one brand.

In terms of exclusive games, PS4 has been winning for quite a decade now. With the release of multiple massive hits like God of War, Uncharted 4, Marvel’s Spider-Man and the anticipated release of The Last of Us II, Its no wonder PS4 has a lot of fans.

This is not to say there are no compelling titles such as Gears 5, Ori and the Blind Forest and many more exclusive games on Xbox One too. Also, the acquisition of major indie studios like Ninja Theory and Double fine means, Xbox One is bound to get some exciting exclusives in the coming generation.

It is hard to decide which console is more visually compelling so we would leave that to the reader to decide, as both consoles are sleek and attractive. Instead, we would look under the hood. 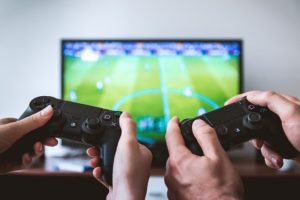 Sony’s PS4 Pro comes 4K ready and is heavier than the regular PS4. Microsoft’s Xbox One X is even more powerful than the PS4 Pro. They should be enjoyed with good TVs or gaming monitors. Both consoles also come with 500GB of hard drives. However, some versions offer up to 2TB of increased storage. PS4 has the option of opening up the console and swapping the default storage with a larger one.

Both consoles have controllers with compelling properties. The PS4 controller, for instance, is the only one that allows USB charging straight out of the box. It also has a reactive touchpad. The DualShock 4, which is the name of PS4’s signature controller, is known for being very ergonomic. 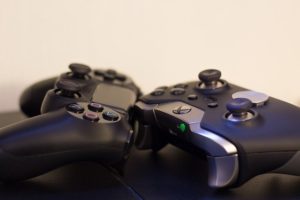 With the use of a $299 PlayStation VR headset, PS4 supports virtual reality. Also, the library of VR games supported by PlayStation VR has grown over the years to include compelling titles like Resident Evil 7, Moss, and Tetris Effect.

Both consoles have compelling properties that make them unique and desirable. However, the PlayStation trades more units as it offers more exclusive game titles.