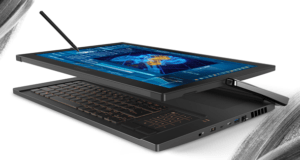 Getting inspired by the design of the 2020 Predator Triton 900 has led to the creation of a standard gaming system known as Acer ConceptD 9 pro that aims to offer top performance supported by accuracy and versatility that matches the most professional CG artist, software developers and AI Engineers.

The Acer ConceptD 9 pro is an impressive looking device that provides unparalleled raw power through its Gen 9 core i9 octa-core CPUs provided by Intels with NVIDIA Quadro RTX 5000 16 GB GPU. It is designed to be a portable studio using Ezel Aero hinge found at the display point centre which is held on both sides by a bracket. This feature enables the laptop to transform between a straight laptop to a digital drafting table from various angles.

The ConceptD 9 pro is equipped with Pantone validated 4k displays that are factory calibrated for Delta E to optimize airflow with high color accuracy and 100% Adobe RGB color gamut. Since the system is convertible, its 17.3-inch screen has a touch screen feature and Wacom EMR stylus with 4096 pressure sensitive levels that magnetically recharges on the top of your display.  The Acer ConceptD 9 pro designers placed the video card and CPU of this machine behind its chassis which also houses the gen 4 Aeroblade 3d fans. The placement for the Aeroblade pushed the mechanical keyboard and touchpad towards the front of the screen taking over the areas meant for palm rest.

Acer used this product to branch a new category of products in a huge way. They also brought along their immense gaming chops along with its design to create a device that perfectly suits content creators. The system also offers a portable digital drafting table which could serve as a one-stop-shop for a large section of people.

Acer had to create ample room space for graphics and processor hardware due to the laptop size. The lack of space forced them to place the touchpad to the right side of the keyboard. This laptop was not designed to be the most beautiful, but its center of attraction is its display and many features for the digital artist. You can get an idea of this from the design and quality of the keyboard and touchpad.

This is not the first computer system with this design but its such a clever one and its one that will bring in the cash when it goes on mainstream market. The laptop was designed with room for many USB ports so, you do not require a docking solution. There are rooms for two USB 3.1, USB 3.0, USB-C 3.1, USB-C Thunderbolt 3, Ethernet, HDMI and DisplayPort.

It’s quite hard to gauge the performance of the laptop by using it for the first time but what it has to offer seems to make this beast worthwhile and offer a promising experience. With its NVIDIA RTX graphics, the laptop is suitable for playing games as much as it’s suitable to render a 4K video.

Acer has been silent on the specific price range of this device. But that Acer will trade the laptop in North America for a starting price of $4,999. For that price, the users would get a 32 GB of 2, 666 MHz DDR4 memory and as much as 512 GB NVMe SSDs in RAID 0 orientation.