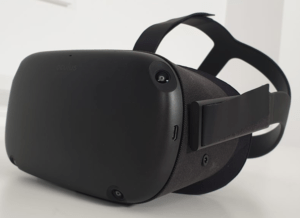 The Oculus Quest is the fourth consumer virtual reality headset produced by the Oculus brand. Just like last year’s Oculus Go, Quest has a different design, meaning it does not connect to a PC or a phone, and it is only meant for gaming.

The VR set has a dual hand controller instead of a single remote attached with four wide-angle tracking cameras. This allows users to walk around in a fairly large space. Most of the popular games, such as the Shooter Robo Recall and Rhythm Game Beat Saber, which came with the Oculus Rift were also added to the Quest.

Let’s get into the details.

The display of the VR set is quite impressive. It measures at 120mm by 110mm by 90mm. The Quest looks surprisingly compact and very light because everything powering the virtual experience is being housed in that same device.

The front of the headset is designed with a matte black plastic with Oculus printed on it. There are three Velcro straps- one located on the top, and the other two by each side are attached to tightened the headset to your head during gameplay.

A 3.5mm headphone jack is located on the side of the headset with the power button also found in the same place. The volume button is also present. Just like the Oculus Go and Oculus Rift, the Quest comes with a focal slider that is hidden in front section of the VR set. This enables you to change the focal distance between the two lenses. If you are a lover of Virtual Reality, then you will know the importance of the slider as it gives added clarity and comfort to enjoy the Virtual reality experience.

The Quest headset is a bit expensive, especially to those that are new to the virtual reality. Oculus will sell virtual reality set with 128GB for $499, while the 64GB is priced at $399. The 128GB variant, which gives a great gaming experience, is the same price as some of the 4K VR sets like the PSVR, which is also priced at $399.

The virtual reality set comes with an OLED display panel of 1440 x 1600 resolution, which produces sharp and vivid colors. The images are clear, and the experience with the Quest is more realistic.

The Quest comes with a snapdragon 835 processor, which makes it less powerful when compared to the Oculus Rift headset.

The device does not require an external sensor, and it is easy to set up, once it is charged, it can start work immediately.