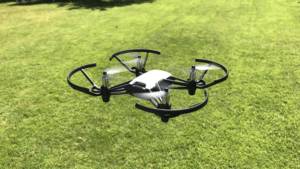 The Ryze Tello is the smartest and smallest toy drone anyone can think of flying. From its features to the intelligent and ample performance it put up, we could tell it was one of the best drones of 2018. This drone came at a time when companies were testing and sampling hexacopters and quadcopters drones. Still, all these new designs did not stop Ryze from unveiling something very unique with the Tello.

The Ryze Tello is more of a toy flying drone to help kids, and new users learn how to operate a drone. The Tello comes with a lot of fun features to captivate the attention of its users, such as live streaming, midair flips, and the ability to program airframe. Courtesy of Intel, this drone comes with some smart technology to make its use safe and secure indoors.

The design of the Ryze Tello is eye-catching due to its nature. It’s quite small that it fits into our palms and could pass for a toy. It measures 98 X 92.5 X 41mm and weighs 80 grams. Asides its size, the drone share some similarities with the Spark. They are common in body shape and their two-tone look. The Tello doesn’t have a landing gear. Instead, it extends its rotor bottom to act as feet giving it a shorter airframe that makes it conducive to fly indoors.

Features of the Ryze Tello

The Ryze Tello comes with an Intel Movidius Myriad 2 VPU, which enables it to launch from an uneven surface controlled by hand motions. Its shrink in size has led to inevitable downgrades in its features such as its use of a 5MP sensor on its camera, reduction in operation time as flight cuts off after 13 minutes maximum even though it’s surprising that a drone this small can fly that long. It doesn’t travel more than 8m/s, and you can only fly it outside when it’s not windy.

On the plus side, the Ryze Tello comes with a few tricks you will not believe the device has, such as having a flip button on the control interface. This feature is used for dodging obstacles in a crowded place or being fancy in air. The drone also possesses various flight mode that includes a mode for shooting a quick 360-degree video, flying away and flying upward on smooth motion.

You can also program the flight patterns using an included coding tool known as Scratch. Although we have not tried this, they say it can be used to plot aerial maneuvers. If a user has any VR-like phone holder, they can experience a flying POV.

The Ryze Tello toy drone may look like a toy to people, but it puts in a performance not expected of a toy drone. With 13 minutes of motion-based controlled flight time, you can easily access and operate this toy drone rather than getting a drone that won’t last. Ryzerobotics is selling the drone for $99 which is a very affordable option in current drone market.