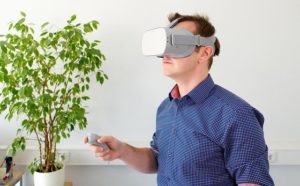 Image by dlohner from Pixabay

Many lovers of the virtual reality universe are going to be excited after reading this review of the Oculus Go because it is the first standalone VR headset. It also marks a fresh era for VR, a period in which gamers can just slip on a headset and delve into virtual reality.

Oculus sell virtual reality sets of many kinds. The Go is a cordless, all-in-one Virtual reality headset for less than $200 with a wide range of applications and games. It brings the world of virtual reality to you in grand style. For its price, the new Oculus headset gives its immediate predecessor, Oculus Rift, a run for its money.

Without going back and forth, of course, there are a few critiques to the Oculus Go, but let me take you through a brief guide of why this headset is just perfect for you.

Oculus Go has a fairly lovely design with its frame made from matte slate-grey plastic. Its design is comfy. The straps that hold the headset together are made from soft, full stretchy bands, and it has nice subtle touches.

Since the Oculus Go is a wireless VR headset, you won’t find many ports; you’ll only find a micro USB port and a headphone jack on the left side of the device. However, I wish the designers added a micro SD slot for expanding the storage capabilities.

At 16.5 ounces, 7.5×4.1×4.5 inches, the Oculus Go is light given the fact that all the guts are built-in. It is a very comfortable device such that it can be worn for hours without any discomfort, even with glasses on. All thanks to the eyeglass spacer chipped into the machine.

One plausible trick the Go manages to pull off is the audio integration; the headphones are not built-in. Instead, the Oculus Go’s plastic arms have slits that house the speakers, this design helps the headset maintain its cohesive profile.

The Oculus Go headset is made up of a Qualcomm Snapdragon 821 processor with a fast switching 5.5 inch LCD with a 2560 × 1440 resolution in an RGB-stripe subpixel arrangement giving it a bright and vibrant display.

The fast-switch frame allows color to alternate much quicker than the usual LCD panel. That helps reduce motion sickness and motion blur as you spin round in VR. It also upgrades the clarity of the visuals, and the screen refresh rate varies from 60 to 72 Hz depending on the game.

Though there is a little bit of screen-door effect, it has not as conspicuous on the Oculus Go compared to other headsets. The Go has a better viewing experience than the Valve and Rift because of the higher resolution.

If you are bothered by the mess caused by VR headsets wires, then the Oculus Go is a perfect substitute. It is safe to say that the Oculus Go is showing the world that the future of VR is indeed wireless and even at a lower price

I assure you top-notch experience with the Facebook gear because it is the most approachable VR gear in the market because it lets you delve into the VR universe with little setup and fewer PC requirements.