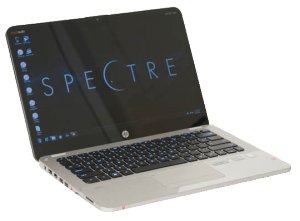 HP had announced the HP Spectre 13 as the world’s thinnest laptop, until Acer announced the Swift 7 which beat it for that. This made HP go back to the drawing board and came back with the Spectre 13 as the world’s thinnest touchscreen notebook. The HP Spectre 13 is really cool and it’s currently one of the best selling laptops on the market. It comes with such a high level of aesthetics, without compromising on performance and value. It is extremely light in weight and thin, and it comes with a solid enough battery for most tasks you will throw at it.

When it comes to looks, the HP Spectre 13 is a winner on all fronts. It stands toe to toe with the best laptops in terms of design and how aesthetically pleasing it is. The HP Spectre 13 comes with a size of 12.03 inches width and it is 8.83 inches deep. HP downsized on last year’s Spectre model bezels but kept the impressive design. The HP Spectre family signature of a stunning gold trim that encloses the two-prong hinge and edges is present in the HP Spectre 13. The hinges are more attractive in the HP Spectre 13 than the previous model. It has a great keyboard design and the keyboard itself is quite responsive. However, the trackpad isn’t as great as that of its competitors.

It has the basic display level for latest premium notebooks which is a full HD display on its 13.3-inch screen size. There is also the 4K UHD option. However, when compared to its competitors, the HP Spectre 13’s display doesn’t exactly match the required level. At full brightness, the contrast was a tad low and the colors appear less vibrant compared to its fellow premium notebooks. Overall, the HP Spectre 13’s display still seems pleasant enough to the eyes, although it could have been brighter and had more contrast to help the black text pop up better on the white background.

For a laptop with such thin chassis and lightweight, the HP Spectre 13 has impressive speed. It comes with the 8th Generation Intel Core i7-8550U, a quad-core processor that delivers better performance and improved efficiency. The HP Spectre 13 shows a higher speed in terms of performance level compared to its fellow premium notebooks. Contributing to this good speed level is HP’s nice cooling system.  it comes with an infrared sensor that helps to measure the heat level of the surface. When it becomes too hot to the touch and modulates the fans, the hybrid cooling system helps to keep it running at full speed for an extended period. However, its integrated Intel UHD 620 graphics doesn’t particularly support gaming but it is good enough for the usual tasks.

The HP Spectre 13 is strong enough to handle the regular daily workload and has a battery life that clocks about 6 hours at full charge. The design is the selling point and it delivers highly in that aspect. The performance level is decent enough but the look will attract stares from people.