The Coolest Laptop of Computex 2019

Laptop design has more or less the same since their creation. It’s a folding piece of metal and plastic with the keyboard on the bottom flap and screen on the top one. Pretty straightforward, right? 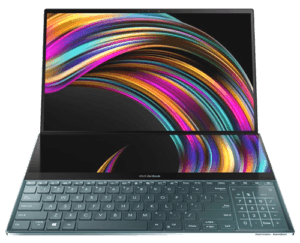 Sure, there have been a few tweaks—detachable screens, laptops that fold 180 degrees, rotate sideways, or otherwise turn into a tablet. But, what if your laptop had two screens? Or a mousepad that turned into a number pad? And why do people always put their keyboards up at the top of the flap when there’s all that extra space to put cool stuff?

These seem to be the exact questions that the designers over at Asus were thinking as they unveiled their ZenBook Pro Duo at Computex 2019 in May.

They call it the “Screenpad Plus.” It is sort of like the Touch Bar you can find on the latest model MacBooks, except the Screenpad Plus is actually useful and much, much cooler. Also, it’s 4K OLED, just like the primary screen. It has the same width, too.

In theory, you can use the extra screen space for editing tools, Photoshop controls, or even keeping track of chat messages while using the main screen for something else—say, seeing comments while live streaming. But, with a screen that big and powerful with a resolution that matches the main panel, there are so many more possibilities of what you can do—it will be exciting to see what developers conjure up.

To accommodate this second screen, the keyboard is shifted down to the bottom of the flap with the mousepad moved over to the right. Sure, this sounds odd at first, but Asus promises that—once you get used to it—the design will feel perfectly natural and ergonomic.

Oh, and did we mention that your offset mousepad turns into a touchscreen number pad, too? That’s right, for all you out there who hate sacrificing the number pad for increased portability or a larger keyboard, Asus has the solution, and it looks pretty slick.

Speaking of size, the ZenBook Pro Duo is definitely not MacBook Air status. While the screens look beautifully lithe and elegant, the laptop itself is a quite a chunk—according to a hands-on review by TechRadar. So, you better work out those back and shoulder muscles if you plan to tote it around all day.

The size makes sense, though, as it has to be a little thicker in order to allow airflow for all its components. Beyond the fancy screens, the ZenBook Pro Duo runs the Intel Whiskey Lake Core i7 processor, and the Nvidia GeForce RTX 2060. Asus also says you will be able to get it with the newer i9 processor. While these components are great performance-wise, be ready for this hefty machine to generate a pretty decent amount of heat on your lap as you use it.

In a world where components are getting continually smaller, consumers are demanding more usable screen space (check out the chin, notch, and bezel debates over smartphones) and screens can even fold, it’s only a matter of time before laptops start catching on to the same innovations that have hit the smartphone world in the past few years. The ZenBook Pro Duo may be an early example, but it could be a sign that the world is teetering on the edge of a major redesign for laptops on the whole. What could be next? Laptops with folding screens? Touch keyboards? A convergence between phones, tablets, and full performance computers? The tech world is an ever changing, ever exciting place.