For a few years now, data science has captivated the minds of tech nerds and non-nerds alike. The amount of data that is being generated is staggering. You have probably seen this chart or something like it. 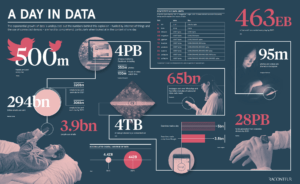 This explosion has led to folks diving headlong into what is now called “data science” but many people don’t consider them more than glorified statisticians. 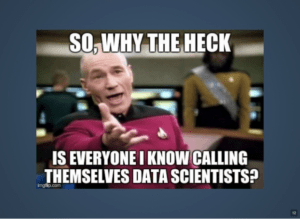 To be fair, people are calling themselves data scientists is fair because for the first time:

All these factors combined to make data science a discipline composed of three main areas: computer programming (for creating models), statistics (for the investigation of data metrics) and math (machine learning logic). This combination, hitherto unavailable, has made this profession very sought after.

So what all does a data scientist do?

Some of the terms mentioned earlier can now be looked at closer. Let’s start from the simple to the complex:

It kinda is, actually. But where does all this go if it’s so hyped right now? Well, what goes up, must come down. But don’t get me wrong, data science is here to stay. Some of you may not remember how hot Enterprise Resource Programs (ERPs) were in the nineties. Companies like SAP, Baan, etc. trained thousands of individuals with their software for use in large firms. Are ERPs still used? Yes. Is ERP still white hot? No. Similarly, MS Excel was the best package for calculating in the same time period. And may it still is, but no one calls themselves an Excel expert anymore since it is so common. Here are signs that this is happening to data science:

Now, data science is a vast subject, whereas Excel is a tool, so it’s not that it will be completely democratized but the fact remains that in the future, a grandmother may tap a button on her smartphone to predict how likely it is that her grandchild will visit her using a neural network.

The future sounds very analytical and robot-like? Don’t worry, these technologies will offer our brains more time and energy things that AI isn’t able to do yet: introspect and contemplate.