In this edition, I want to focus on that one device we see so less, it’s very easy to overlook its importance. I speak, of course, of the humble router. 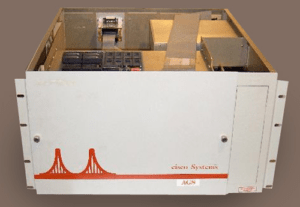 So hot, it blew my lid off.

While the rest of the world was getting blown away by Steve Job’s takeover of the consumer PC market with their pathbreaking “1984” ad, another quiet revolution was underway on the West Coast.

Sandy Lerner and Len Bosack had jobs as researchers at Standord University where they also serviced department computers. At that time, you have to remember, computer science less mysterious than rocket science, microchips are still are widespread and most computers in use at that point were in institutions like universities and large companies.

At that point, there was a thriving community of computer scientists like Lerner who did great collaborative reseatch to invent what would later become routers (including William Yeager, who wrote the software). Now this was a grant by the government (DARPA, no less) as many project are and hence this was not really proprietary. When the findings were published, Lerner and Bosack wanted to go public with it, because why not? It wasn’t owned by anyone. To their disappointment, Stanford refused. They not only disallowed licensing of the technology but they also sale to other univerisities. This was strange since being a government grant, access could not be denied. Lerner and Bosack had jobs and were not looking to be entrepreneurs at the time so they did not even mind if Stanford received 100% of the payout. But it still did not work out.

Lerner and Bosack had no choice but to start their own company. The innovation had to go to market and they felt obligated to this cause. Stanford did file complaints accusing Cisco of stealing its technology but then agreed on a deal of royalties up till $3 million in sales and maintain its networks for a stipulated period of time. This was something Bosack and Lerner would have wanted earlier but Stanford was forced to do it only because Bosack and Lerner quit and they realized they had little support for their departments. Hmm, strange behavious from a school supposedly churning out smart people.

The path was finally clear and Bosack and Lerner could then focus on building their company. Interestingly their logo above and their revised one below has an interesting backstory

The name “cisco” was obviously derived from the city of San Francisco, but there are a few additional factoids in this bit of trivia: it was the 36th name they came up on! So yes, you’re not the only one who thinks all the good names are gone. The logo, which was the Golden Gate bridge in the original design, was chosen by Lerner because it was a gateway, like a router! That one blew my mind. Lerner and Bosack did not even understand what it might become.

It was difficult to fund the company but Lerner and Bosack made secured funding eventually from famed VC Don Valentine of Sequoia. This man had launched Apple and Intel. While the funding helped Cisco gain traction and attention, the aggressive all-business style of the managemen he brought in resulted in Lerner being fired unfairly, while Bosack resigned in solidarity. So ended the journey of the founders in the company.

Though they were compensated in the ouster, it was not much compared to what Cisco would become. But Lerner and Bosack actually devoted a lot of it to personal charity since that wasn’t what they were about from the beginning. While Bosack was a described as a reticent genius, it was Lerner who was the face of the company, she was one of the few women to head a department in those early years of computer science and who weathered a male dominated industry to help create an essential device that is omnipresent in the world today.