Smartphones are becoming more powerful every year. They now include features like cameras that rival even the best point-and-shoot cameras, foldable screens, super-fast internet connections, and more. Smartphones do all this in a device small enough to fit in your pocket. Surely, we now live in the age of Star Trek, but does that mean it’s time to sell your laptop? The answer is maybe. 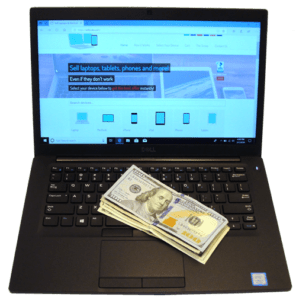 Let’s take a look at why

Ten or fifteen years ago it was all but required to have at least one computer in every home. As computers became more affordable, people started buying laptops instead. Consumers liked laptops because they are portable, powerful devices that can be used for everything from media creation to content consumption, banking, and just plain old social activities.

Then in 2007 Apple revolutionized the smartphone world. Sure, there were smartphones before the iPhone, but Apple made the smartphone accessible to the general public. More than ten years have passed since then, and the smartphone has been refined to the point of being a commodity. Everyone today has a smartphone, and that’s changed how people interact with digital devices.
Smartphones and tablets have taken over. It’s become clear as smartphone sales have risen and laptop sales have flattened over the past ten years that the smartphone is now the primary computing devices of the general mass.
This isn’t all to say that laptops are obsolete, but where do they fit in today’s world? Let’s take a look.

Content creation includes everything from writing articles, blog posts, and stories, to making music, movies, and YouTube videos. It’s very difficult to do any of this with a smartphone. It can be done, but creating content on a smartphone is not a pleasant experience. Try typing a 1000-word article on a smartphone. You’ll spend all day fixing mistakes. Likewise, the camera is good enough on a smartphone to capture video footage, but you need the processing power of a good laptop to edit that video. You also need a good, large screen that a smartphone can’t provide.

Angry Birds is a fun game, but playing Fortnite on a smartphone is the worst experience ever. You need a controller, keyboard, and mouse for a good gaming experience. You can also do some good gaming on a console like a PS4 or Xbox. I’m a PC enthusiast, though, and prefer a good laptop. I can haul my laptop to conventions, competitions, or friends houses far easier then I can a console. A powerful PC can also provide consistent framerates that a smartphone can’t do.

There are two sides to the VR argument. One is gaming. The PSVR is a great entry level VR headset, but WMR and the Oculus Rift blow it away. I would only recommend the PSVR for someone that already has a PS4, otherwise, the outright cost is just as expensive as building a good gaming PC and buying a WMR headset.
The other argument for VR is in the business and engineering space. Engineers are quickly realizing the power of VR in visualizing and building a 3D object. Engineering is also one of the fastest growing career paths in the United States so this need is growing. You need powerful PCs to process these kinds of 3D models, though.

A smartphone can help keep your life organized. Calendar, email, and to-do apps are great functions for a portable device. Trying to do any kind of business communications, productivity, spreadsheets, etc.. is extremely difficult on a smartphone. In business, time is truly money. The time saved using a good laptop for any of these functions is far more valuable to keep a laptop nearby. The take away here is to understand that smartphones and tablets make good consumption devices, but when you need to interact, and input data, you need the proper device to do that in an efficient manner.

So, the question still remains, should you sell your laptop?

If you think that that you could live without a device like a laptop, then I would make the argument to invest your money in a good quality smartphone. I don’t think it’s unreasonable to expect someone to spend around $1000 or more for their primary computing device every few years. If your primary computing device is your smartphone or tablet then sell your laptop and use that money to subsidize the cost of a good smartphone. It’s a better decision in the long run.

Get a device more suited to your specific needs.

If you have a generalized laptop, it may be worthwhile to sell it and buy a device that’s more suited to your specific needs. Though I offered a list of areas where laptops are far better options then smartphones and tablets, if you’re going to buy a laptop it’s best to get one that is customized for your needs. For instance, content creators, like bloggers and article writers, need to have a full sized, responsive keyboard with a bright screen that has lots of contrast but is light enough to haul to various workspaces. On the other hand, a gamer or an engineer is going to want a huge, powerful laptop. It’ll be heavy and less portable, but it’ll be able to chew through graphics quickly.

If your laptop is aging, it would be worthwhile to sell your laptop and use that money to subsidize a new device. Technology has advanced a lot in the past few years. New, very powerful graphics cards are coming out that will blow away older versions and now offer things like Ray Tracing. For someone that needs portability, laptops have become a lot thinner and lighter. NVMe drives are now common and make a huge difference in productivity. The USB 4 spec was just released. New laptops will soon be released with this new USB spec, and that’s a big deal for artists.

It’s not a bad idea to sell your laptop and use that money to subsidize your next computer purchase, whether that computer is a smartphone or a more specialized laptop. Take a good look at your needs, decide what kind of device is going to going to fulfill those needs, sell your old electronics and get something that newer that will improve your quality of life.