These new Smartphone technologies will blow your mind!

Think there’s nothing new in the world of smartphones? Think again! Smartphones are getting smarter every year. Since the advent of the iPhone, they’ve gained all kinds of crazy features that can help keep you productive, informed, and entertained. If you haven’t been keeping up, this guide will bring you up to speed. 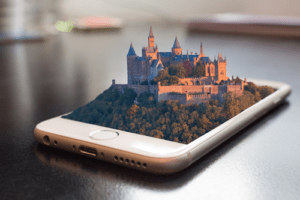 Image by FunkyFocus on Pixabay

One of the craziest things to come out of the recent Consumer Electronics Show (CES) are folding screens. You might be asking “what in the world is a folding screen? Like is it paper?” Well yeah – it pretty much is. You can physically fold your phone in half, giving you a device in two different sizes. Now you may be asking yourself: “okay neat, but why would I want this?” The answer is that this gives you a tablet-sized phone – in your pocket. You may pull our your smart phone for quick browsing on the subway or while waiting for the bus, but when you sit down now you can pull out a full tablet. You’ve basically doubled your screen real estate! This is a game changer. No more tiny screens – just super gigantic ones like out of a sci-fi movie!

Star Wars holographic chess anyone? Much like folding screens (see above), this doesn’t even seem possible at first glance. “Are these displays really projecting 3D? Like with depth?” The answer is a strong yes. It is early, but there is promising technology being rolled out. RED, famous for their production 4k cameras costing major $$$, has partnered up to create a new smartphone with cutting edge 3d holographic displays. These new 3D screens pop right out, giving you the sense of perspective missing from your run-of-themill 2D screens. The phone is $1300 for now, but with Moore’s Law on our side we can expect it to trickle down into more affordable models. Imagine board games played right on top of displays, the pieces jutting out. It’s right around the corner!

If you’ve been on Tinder lately, you’ve probably noticed everybody’s love of Snapchat filters. They’re fun, creative, and make you look better – who could resist? Yet with augmented reality, there’s a lot more happening than you might think. For instance, what if you’re in a country and all the signs read in another language? You might be okay if its one you know or one that sounds similar, but what if its Japanese? Unless you know the alphabet, you’ll probably struggle. Enter the new Google translate app: simply move your phone’s camera over the sign and watch it translate in real time. It’s like magic. That’s not the only cutting edge AR app either. A lot of them let you see what will happen before you make a commitment too. Even companies like Ikea are getting in on this. Their new Ikea Place app will let you envision how their furniture will fit in with your living room. You can literally see before you buy. What else is there? What about tattoos? They are cool, but pick the wrong one and you’re stuck with it for life. Well Inkhunter will let you see how the tattoo fits on your skin before you commit to one. You can move it over your skin and see how the tattoo looks, giving you an instant, real-time visual. AR has so many uses and with phones getting more powerful every year, we can expect that the apps using them will only go up!

You ready for the smartphone of the future?

Between AR, 3D holographic displays, and folding screens, smart phones have never been more exiciting! With these new smartphone technologies coming out, we’ll soon wake up and wonder how we ever lived without them. And if it’s time to sell your iPhone we’re here to help. Apple still dominates US market but this could change any time now.