When I first saw the Yoga C930 in a pile of Lenovo laptops, I glossed right over it. After all, this was the same time I saw the new Yoga Book, with a futuristic frame and crazy keyboard, it was distracting. However, I'm really glad that we opted for a C930 review unit instead. This notebook might be my new go-to. 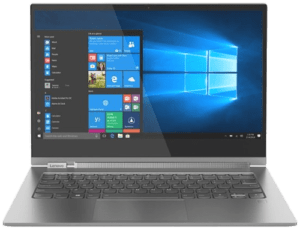 To appreciate this machine you have to look past that forgettable iron gray color scheme. I do wish Lenovo would offer bolder colors to go with their hardware designs. I say that, because this chassis, to me, is close to perfect. It's lightweight, trim with lines that are, at once, modern and sleek, and also restrained enough so it doesn't feel like it's showing off. If you're aim is at portability you should sell laptop that's too heavy and purchase the Yoga.

Pop the lid and the first thing that catches the eye, even before the screen, is the Dolby soundbar that's built into the hinge. The dual woofers are located in the body but the tweeters are built into the bar, which rotates, so the sound is radiating outward whether you're in laptop, tablet, or presentation mode. While watching a flick from about 3 feet away the sound was rich and enveloping. When listening to music from across the room the speakers were kind of tinny and there could have been more bass.

The 4k display is stunning. If you want to save some money you can also opt for an HD panel instead, but having tasted Windows in 4k with this kind of sharpness and color saturation, there's no going back. The picture is tuned by Dolby Vision and set to the bright color profile by default. Out of the box, the display looks incredible.

Whether you choose the full HD or 4k, you get a touch screen, which means you can make use of the stylus. Normally, I wouldn't be putting a pen in the "pro" category. Typically, they cost about $100 more, and in the case with something like the Surface by Windows, you've got to click them magnetically to the outside of the casing, which means they often fall off in your bag.

With the C930, the stylus comes included and it has a nice little silo to live in on the back of the machine that charges the pen while it sleeps. At the end of the day though, I do think that the Surface and Apple pens are the better styluses in general. This one is on the small side and there's no tilt support for shading. The silo's location also has the effect of moving all of the ports to the left side of the laptop.

As far as ports go you're getting two Thunderbolt 3s, one USB-A, and a headphone jack. While you get the standard Lenovo brick-on-a-string for a charger, the tip is USB-C, which makes me happy. It also charges from 0-50% in 30 minutes. Battery life is more than serviceable. You can expect at least a full day's work out of this machine without any issue whatsoever.

Now, the best way to ruin the look of a nice laptop is to slap a sticky note on your webcam. But, in today's world, it's better to err on the side of caution. Lenovo took a note from its own Google smart display and added a physical sliding cover to the webcam. Like the silo for the one, it's these little bits of attention to detail that I appreciate every time that I open the machine.

The act of popping it open is one of the not so great parts of the C930. Let's start there for the downsides. It doesn't quite pass the one-handed opening test. Some folks will also be bothered by the wasted space below the display and the decision to ditch the Face Unlock for a fingerprint sensor. Neither of these bothered me as much as the bloatware.

The McAfee anti-virus package that Lenovo pre-loads is one of the more aggressive I've seen. The pop-ups take up a full 1/4 of the screen and they persist until you uninstall all of the McAfee processes. The combination of these, with Lenovo's own security pop-ups, makes for a tacky, annoying experience.

I also found that the standby battery to fluctuate substantially. Sometimes it would drain at about 1% per hour while asleep and other times I'd open it up and find a low battery warning when I didn't really expect one. This, along with the always frustrating Windows updates, is something that I complain about on every Windows machine. I really wish that Microsoft would get its OS in order, in these respects.

The webcam is fine, but maxing out at 720p, it's not the greatest you can get. And just to be greedy about it, I'd like to have seen some more features, like an SD card reader or a dedicated graphics card.

That last bit speaks to my perception of this device versus the reality. The reality is, this is an ultrabook, built with portability as paramount. If you're a super mobile person, of course, you will love that. But, it also brings so much capability across the processor options, the great display, and soundbar, little touches like the pen and webcam cover, that I see it as more of a "do-everything PC". The only thing that will stop you from using it as a main writing and gaming rig is the lack of a dedicated graphics card. But, you do have the option of connecting an external graphics unit, thanks to the 4-lane PCIe Thunderbolt ports.

The only thing we need to worry about is the starting price of $1,100. Ouch! You could get ahead of the game if you have an old laptop that you want to sell. You can sell your laptops or other electronics online to secure some extra money to put toward a purchase like this Yoga C930 by Lenovo.