Here's a new one for you, a smartphone with two screens. This is the Nubia X, an Android smartphone that comes with two built-in screens. One on the front, and one on the back.

If you want to work this contraption, there are two fingerprint readers on the sides, so when gripped allow whatever's displayed on the front screen able to flip over to the back panel. All the while retaining full functionality. You can run the whole phone from the back. When the back screen is turned off, it looks like a normal phone.

The Nubia X comes with a built-in screen protector on the front. You fond a notch on this phone because there are no front-facing cameras or sensors to hide. This allows the entire panel to light up from edge-to-edge with pretty much no bezels. The glass is tempered so it is pretty scratch resistant. Part of what makes the front screen bezel-less is the fact that the earpiece is also super small and well hidden along the frame. 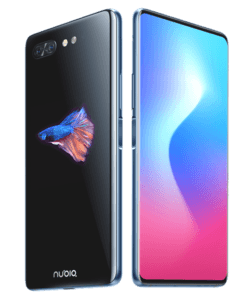 The back screen is a bit different from the front. First, it has a lower refresh rate and out of the box, it has a yellow tinge to it. It, as well, has a screen protector on it that provides extra protection. As for the yellow tint to it, that's just a blue light filter that you can disable and then you'll get a normal looking screen again, but the blue filter is in place because it's intended to be an e-reader and by lowering the blue light wave you can protect your eyes.

This frame of the phone is blue anodized aluminum that looks really good. The only possible issue with the frame could be where the fingerprint resides. If the phone bends in that area it could pop the buttons off, but with a slight bend test done by hand, it didn't seem to pose much of a threat. The top of the phone has more metal and what looks like an IR blaster for controlling home electronics.

Two is kind of the theme of this phone. It has two display, two fingerprint sensors and also two SIM card trays. There is only on USB-C port on the bottom alongside the loudspeaker holes.

You be wondering why there are two screens on this phone, and that's a perfectly legit question. Well, here's the deal. There are no front-facing cameras or sensors on the Nubia X as mentioned before. It just has the dual rear-facing cameras, one is 16MP and the other is 23MP. One's a regular lens and the other for portrait mode. When you want to take selfies you get to use the powerful rear-facing cameras while seeing your face at the same time. It's an interesting solution to the notch problem, but also this solution actually works. I'm impressed with the ingenuity, and never saw this coming.

Like the dual everything else on the phone, there are two fingerprint sensors. You can use only one or set up both for extra security. It comes with a standard Snapdragon 845 CPU and up to 8GB of RAM. The battery is sizable with a 3,800mAh pack that should give you an entire day of use.

The front screen is a 6.2" 1080p IPS LCD, and the back is a 5.1" 720p AMOLED panel. The main complaint I can find about the screen is that they are noticeably not very bright and you will have issues being able to see it in highly lit areas or outside. The rear screen can act as an always-on display without showing the actual edges of the screen. This provides the aesthetic illusion that there's no screen at all on the back. Whether the screen is lit-up or not, you can hardly see the rectangular edges, due to the super black AMOLED pixels.

It's interesting to see these innovated smartphones popping up everywhere. Do you think this is the future? Do you feel that a dual-screen phone is a solution as opposed to a motorized front-facing camera? Is it going to replace your personal computer? Maybe you can sell your laptop and stick use this phone instead. These back-to-back screens are certainly interesting.