The Air Up There... It's Not What You Knew A Few Years Ago

It's easily the single most requested thing on any laptop shoppers' wish list is a brand new, fully updated version of Apple's MacBook Air. After years of waiting it's finally here, but it's not the Air you once knew.

For most of its 10-year life, the classic MacBook Air was the default laptop for pretty much everyone. High school or college student? MacBook Air. Writer or creative type? MacBook Air. Office drone or startup guy? MacBook Air. Some of you were there way back in 2008 for the first MacBook Air, and it was no doubt a game changer. In fact, for many years, we called it the single most universally useful laptop you could buy. 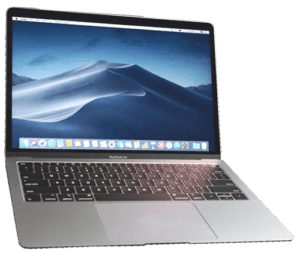 For most of its life, the MacBook Air was $999.99. It wasn't cheap but it was an achievable luxury, especially for something that was rock solid and would last years and years. But lately, it started to feel like the old guy at the club, still showing up but kind of dated.

Everyone else went to higher-resolution screens that went edge-to-edge on the lid, bigger touchpads, regular component upgrades, thinner and lighter bodies. For most of the year, the rumor mill has been surging with talk of a new slimmer and reasonably priced MacBook with a better screen that would either update or replace the air.

Well, the rumors are correct and we now have a new MacBook Air. It's an Air only in name because everything else about it is different. New screen? Check. New body? Check. New keyboard? Check. New touchpad? Check. New processors? Check. It seems like it only keeps the Air name for nostalgia reasons. It fits into the current MacBook design sensibility, it's a bit larger than the 12-inch, a bit smaller than the 13-inch Pro, and much different than the classic Air which Apple is still selling, at least for now.

Let's look at the screen. No longer do we have the old low-res Air with a big thick silver border. Now the 13-inch screen has the same slim style black bezel under edge-to-edge glass as the MacBook and MacBook Pro. The resolution is also four times greater and that makes a huge difference.

What else did Apple fix about the MacBook Air? It's got new 8th generation Intel processors instead of 5th or older ones. You get more RAM and storage space. It's thinner and lighter, but not in a top-tier of lightweight laptops. It's made of 100% recycled aluminum if you care about that sort of thing. Which you should, because we're all about recycling. There is a lot from the MacBook Pro line that's trickled down, and that's both good and bad.

The Retina screen is a big plus, as is the more modern touchpad. With that touchpad comes the infamous butterfly keyboard. You know... the super flat one where people's keys kept getting stuck? Apple claims to have fixed the problem, but it's still a shallower, less tactile keyboard than the old Air. Tat keyboard comes with the very best part of the MacBook Pro's Touchbar, the fingerprint reader. Many people claim it's the best fingerprint reader found on any laptop by far.

Are you ready for the really difficult part of this conversation? If there was one burning question about a new MacBook Air, it was the port situation. You can have any port that you want on your new MacBook Air as long as its USB-C. But hey, at least you get two, so you can now charge it and hook one peripheral to it, and they are both Thunderbolt 3 supported. Most of the super slim Windows laptops are only equipped with USB-C, so maybe it's time to get on that boat if you're a holdout. Or, you can always invest in some dongles. So, yeah, no SD card slot, HDMI, or a USB-A. It does still have a headset jack, unlike their phone lineup.

Right now Apple stores sell MacBook Air for $1,199.99 which is a $100 less than the 12" and 13" MacBook Pros. However, the days of buying your first MacBook for under a thousand dollars are gone. So, you're going to have to do what you can in order to save up for this if this is indeed your desired new Apple laptop. Maybe you need to think about selling your old laptop or phones, or even if you have an older tablet hanging around that you don't lose you could sell it too. Who knows?