The 8-Core Ryzen laptop by Acer

This is a Helios 500 by Acer, but it's running AMD hardware. It's running AMD's Ryzen 7-2700 as well as AMD's Vega 56 GPU. These are very powerful components stacked into this chassis that has been proven to be very good at cooling things. 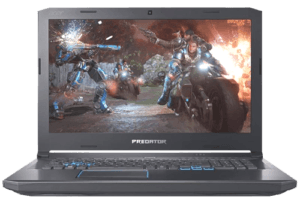 What makes this laptop special; what makes it different, is that this is an 8-core CPU. All the stuff from Intel this year, on their mobile stuff, are 6-cores. That means the i7 and i9 are all 6-core CPUs. Those are great CPUs. But this is an 8-core CPU. That means that if you're running something that's CPU-dependent, this is going to give you better performance. When it comes to desktop applications, this thing is a beast and, it gives you great performance for the money. Now, they are running the exact CPU in here, with 8-cores. There is not much else different on this device compared to the Intel version that we've seen before.

The screen is FreeSync compatible, in case you have multiple FreeSync external monitors. It is reasonably bright at 300 nits. It has a color accuracy of sRGB at 92% and Adobe RGB at 76% and like I said it runs a 144 Hertz FreeSync as well.

In terms of actual build quality, the keyboard, the trackpad, the battery size all remain the same as in the Helios 500 of before, it's just the CPU and GPU that has been changed. 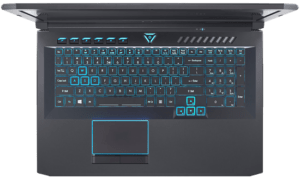 Let's talk about the CPU first. The 8-core Ryzen 7-2700 is a beast. It's literally the most powerful multi-core CPU that's available on a laptop right now. Of course, there could be some custom built ones that are larger, but in terms of commercially built, this is the leader of the pack. 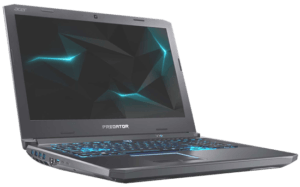 The overclocking software from AMD works on the CPU, and since it's a well-cooled chassis they were able to take advantage of it. You are able to get decent overclocking, but nothing crazy from this laptop. On desktops, you're able to hit 4GHz on each core, not without difficulty, but it is doable. This laptop allows for 3.7GHz on every core, which is really respectable considering it's a laptop. You can also disable core if you want to run only 4 cores for games and such, but when you need it for multi-core applications, they are there when you need it.

Running a Cinebench it got the highest score we've ever seen in a laptop. It's the same with video renders too. It's pushing out considerably faster render times than an i7 or an i9. Those 2 extra cores really make a difference. 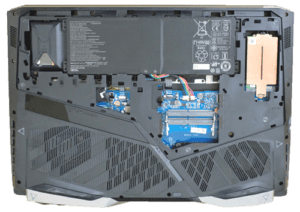 The GPU in this rig is AMD's Radeon Vega 56, and it's also a very powerful card. It's arguable that it's very similar in performance to a GTX 1070. Of course, depending on the title some games will do better or worse. We found that DirectX 12 games tend to do better on an AMD card. If you don't know what DirectX 12 is, it's basically software developed by Microsoft that talks to the PC's hardware components. 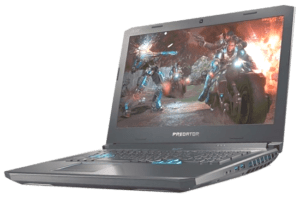 The gaming performance on the AMD variant of the Helios 500 is good, but we wouldn't say that it's better than the Intel version. So, if you're trying to decide on whether to get this one or the Intel i9 version, it is really going to depend on what you are looking for. If you're just playing games with this laptop and nothing else, it'd be safe to lean more towards the i9 and the GTX 1070 variant. This system here is more geared towards the content creators out there. If you're a video editor, or you deal with 3D work such as 3D modeling or game development, the 2 extra cores in the Ryzen system are going to give you better performance than the Intel system.

That's what this Ryzer is all about. Finally Acer is able to build and sell laptop that's an absolute beast for multi-core applications.