Who here doesn't like special edition swag? I know I do... and I know I like where these laptops are going with it. Today, I'm going to tell you about some special edition laptops from the gaming world that we are most often seeing in their black and red or black and green options. Because we're so used to seeing them in their native black colors, these really stick out as being something really special and unique. For people that are interested in this type of design aesthetic, this stuff looks really cool. Having handled these special edition products in real life, it was noticeable how the different brands that sell laptops for gamers handled their special or limited editions products differently.

The three I'll discuss here are the P65 from MSi is kind of like the GS65 "prestige or premier" edition. The Helios 300, they have a black and red Predator Helios 300 that is fairly common and then they made a special edition of that. Finally, the Mercury Razer Blade 15. This is a device that's normally black and green from Razer, but they now have a white and silver version. 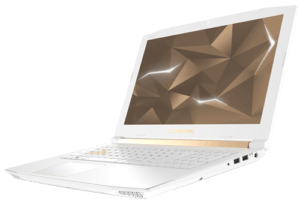 First, I'm going to cover the Helios 300 special edition from Acer. This is the cheapest of the bunch but they did a really good job on this laptop. It's a white and gold themed plastic build with a white pearlescent plastic and gold accents that are uniform in color. This is notable because no matter what angle you look at it from all of the gold accents are the same and that's important when it comes to making a special edition laptop like this.

Inside there is a white keyboard, the backlighting is white, there are gold accents on the trackpad and keyboard with the WASD keys accented in gold too. It's a great gaming laptop just like the black and red version, it's just that this white and gold version looks so much better. Acer took it to another level. Included in the box are a white Acer adapter, a matching white and gold mouse and a pair of headphones. It's little details like that that actually make it feel like a special edition. Amongst the three, this laptop sticks out as being a really complete and well thought out package. 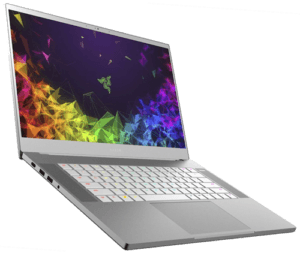 Next up, is the Mercury Razer Blade 15. This device isn't white, it's silver. Now the normal Razer Blade material is an anodized black aluminum but you can't anodize aluminum white. You can kind of etch it and give it some texture so that it reflects light a certain way, but you can't really apply a coating of white onto aluminum using anodization. So, what they've done is kept it silver with a really bright finish and with the white backlighting and white keys it gives it a white look overall.

The actual finish itself feels slightly different than the black Razer Blade. The silver has a smoother feel to it and it also doesn't reveal fingerprints early as easily. It's basically fingerprint proof in this material and it's hard to see any type of smudging.

The top surface is missing that glowing green Razer Blade logo and has been replaced with a more subtle polished silver logo. It still looks cool and still looks distinctly like the Razer logo if you look at it from the correct angle, but it's not as obnoxious as a glowing green triple-headed snake. The keys on the keyboard are white with the Razer Chroma Lighting effects and it looks really good. Everything else on this laptop remains the same as the regular version; only the aesthetics have changed. 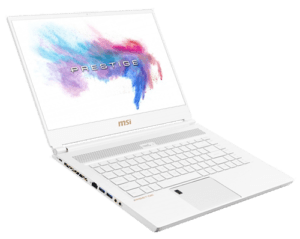 The last one I'll cover here is the P65 from MSi. This one may be the most disappointing, but let's see. If you're interested in white laptops, this one may have caught your eye. For the hardware that you're getting, it's a reasonably well-priced laptop. However, the process they used to make it white is different from the others. They seem to be using some kind of spray. Whether it's a point or a coating it doesn't seem to look as refined as the other two. There are parts of the laptop that look like they could've used an extra coating of whatever it is they are using. If it were black, it would be able to hide its blemished easily because black paint tends to hides things better. Because it's white, those imperfections are more noticeable.

Another thing is the trim on the lid is silver and on the original GS65 it's gold. It's kind of strange because there are also still a lot of gold accents on this laptop along with the silver. It looks like a half/half version, or incomplete. You may think, "who cares?" But people are buying this version one reason, and one reason only, its aesthetics. When you're spending that kind of money for something different you want it to look as perfect as possible, not like it's only been half-done. it's still a great product, and it still looks pretty cool, but it's just not as perfect of a white laptop as the other two.