Overnight Shipping and How It Works

Here at SellBroke once you have decided to sell laptop or cell phone we offer you free shipping by paying for your shipping and sending it to you via email so all you have to do is print out the shipping label and smack it on your package and away it goes. It is a very smooth process for both you and us as a company. But why is it such a smooth process? Here today we are going to give somewhat of an explanation as to why your packages get to us so fast and hassle-free.

Overnight shipping is an absolute masterpiece of logistics that happens every single night. It may not be cheap, but you can get a package shipped from Miami, FL on a Monday to Anchorage, AK, by 8:30 AM on Tuesday. In fact, you can even ship a package from Edinborough, Scotland on a Tuesday and have the package arrive by 9 AM on Wednesday. The speed and efficiency of these worldwide delivery networks are mind-blowing and it all happens while we sleep.

The three major consumer courier companies are FedEx, DHL, and UPS and each is as impressive as the last. FedEx has more planes than the Emirates, Etihad, and Qatar Airways combined. DHL delivers to every country in the world including North Korea, and UPS flies to more than double as many destinations as the largest passenger airline.

Each has a global network that allows for lightning fast shipping at relatively low prices. Behind all of this speed are enormous air networks that connect the entire world daily. Each of these three operates hundreds of flights nightly, but FedEx is the best example since they are operations make them the largest cargo airline in the world. They have 650 planes flying to 400 destinations carrying 6 million packages every single day and the majority of these flights operate to or from one of their hub airports.

FedEx’s hub airports are spread out all across the world and serve as sorting points where packages are sorting to one plane or another. They have hubs in Singapore, Guangzhou, Shanghai, Seoul Osaka, Anchorage, Oakland, Dallas, Indianapolis, Greensboro, Miami, Newark, Toronto, Paris, Cologne, Milan, and Dubai. The most important one of them all is in Memphis, TN. That’s their Super Hub.

Memphis is not a huge city. Only about 650,000 people live there, but the reason FedEx centers their worldwide operations in this city is that of its location. Memphis is actually not in the geographic center of the US as might make sense, but it is central. Only about 200 miles away in Wright County, MO is the mean population center of the US. This is the average location of every resident in the US. Meaning that the FedEx Superhub in Memphis is in the best location to reach the most people in the shortest amount of time. For similar reasons, UPS has their equivalent global hub, World Port, nearby in Louisville, KY.

The scale of FedEx and UPS’ operations in these relatively small cities is staggering. The size differences between the commercial terminals and the FedEx and UPS terminals are crazy big. The FedEx and UPS terminals are by far larger. You can’t even fly to the West Coast non-stop on a commercial airline from Louisville,e and yet UPS flies from this small city to five different continents. FedEx’s operations in Memphis make this airport the second busiest cargo airport in the world, even above those enormous cities like Tokyo, Paris, Dubai, Shanghai, and falling short only to Hong Kong.

How the FedEx Superhub really works is that every night, about 150 planes fly in from all around the world between the hours of 10 PM and 1 AM. Immediately upon arrival, the planes are unloaded and their packages are put into the hub’s automated sorting system. Within only 15 minutes, each package at a staging area for its next flight where it’s loaded into containers. Planes can start taking off again at 2 AM and continue until about 4 AM, which means that everywhere in the US can have a FedEx plane arriving by 6 AM, but there are some destinations that don’t ship enough packages to require a non-stop flight from Memphis. To get to small towns fast, FedEx runs flights in small propeller aircraft from the destinations of their larger jets.

Presque Isle, ME, for example, is too far small of a town at about 10,000 residents to fill a full-sized pane, so every morning, once the larger planes from Memphis arrive in Manchester, NH, and Portland, ME, packages bound for Presque Isle are sorted into smaller prop planes that continue north. With this system, even towns like Presque Isle gets their packages by 9 AM as every spoke in the system essentially functions as a mini-hub. Packages are transferred from planes, to smaller planes, to trucks to reach their destination as fast as possible.

It’s important to note that not every FedEx package runs through Memphis. That would be incredibly inefficient if a customer wanted to send a package from Phoenix, AZ, to Seattle, WA, where only 1,100 miles separate them. Routing them through Memphis would be more like 3,000 miles and 6 hours in flight. The package would still make it overnight, but FedEx would be wasting fuel carrying that package an extra 1,900 miles, so thet’s why they have secondary hubs.

FedEx’s most ingenious hub is in Anchorage, AK. Anchorage, with fewer than 300,000 residents, is home to the fourth busiest cargo airport in the world. This is thanks to geography. If you take a straight line from Osaka, taking in account for Earth’s curvature, it goes directly over Anchorage, AK. This airport is the perfect stop-over point for flights going from the US to Aisa.

Dozens of cargo airlines operate in Anchorage but most of them just use the airport for refueling and crew swapping. Modern airplanes can fly non-stop from the contiguous US to Asia, but doing so requires more fuel which requires taking less cargo. it’s just cheaper to stop in Anchorage, but FedEx and UPS use the stop for something else. Sorting.

If FedEx wanted to maintain current shipping times without the Anchorage hub, they would likely have to run non-stop flights from each of the Asian hubs to each of their American hubs, but they just don’t have the demand to fill this many planes. Instead, they run flights from their Asian hubs to Anchorage and then onward to their many US hubs.

While stopped in Anchorage, packages from Asia are processed through customs and sorted to be put on a plane bound closest to their destination. This helps cut down on shipping time and cost. Shipping is an incredibly price-sensitive business.

These courier companies rely on enormous contracts with retailers and, when some of these retailers are shipping millions of packages per day, every cent matters. However, in a lot of ways the express shipping model is inherently expensive largely because of how couriers use the most expensive assets; planes. So much is centered around those few sorting hours at the bug hubs so FedEx’s planes all have to wait around to arrive at the exact right moment. Some FedEx hubs, such as Memphis, do sort packages during the day, but the overwhelming majority of their business happens overnight. 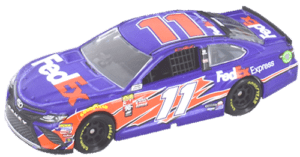 FedEx’s flight from Oklahoma City, OK, to Memphis, TN, for example, leaves at 4 Am and arrives at 5:20 AM, but then the plane waits around until 10:10 PM to fly back to Memphis. That’s over 17 hours sitting in Oklahoma City and, on that route, the plane is only flying for about 2 hours per day. Meanwhile, commercial airlines regularly fly their planes for more than 12 hours per day, meaning that they have 6 times higher aircraft utilization. FedEx would never be profitable if they bought all new multi-hundred million dollar aircraft to use a mere few hours per day, so they don’t.

Overwhelmingly, FedEx and other cargo airlines use old aircraft at the end of their lives. You’ll almost never see Airbus A300s flying for passenger airlines anymore, yet FedEx, UPS, and DHL collectively own hundreds of them because they are cheap. They didn’t spend much purchasing these aircraft so they don’t have to worry about using them enough to offset their cost.

UPS does have some brand new 747-800 aircraft, which are highly efficient, but they specifically schedule these planes on their longest routes so that they can recover the high purchase price through lower fuel costs. With older aircraft, fuel costs might be higher since the planes are less efficient, but overall it’s worth it since it allows FedEx to profitably leave their planes sitting for all but a few hours each day. Some passenger airlines, such as Allegiant Airlines in the US, use the same strategy purchasing cheaper planes to allow them to fly fewer hours per day profitably and it’s now a tested a proven business strategy.

Express shipping is one of those businesses that require enormous networks to make work which is why you don’t see small shipping companies. It’s almost impossible to get started in this business unless, of course, you can make your own demand.

Amazon, which ships more than a million packages per day, is getting into the delivery business. They’ve established a fleet of 32 aircraft and are building out their logistics network. When shipping so many packages, Amazon is operating at a scale where they can profit by taking the shipping companies out of the loop.

Meanwhile, FedEx, DHL, and UPS are continuously focusing on further increasing the efficiency of their networks since in this business, more than any, time is money.