Shutting Down Your Computer Correctly To Avoid Crushing Your Dreams 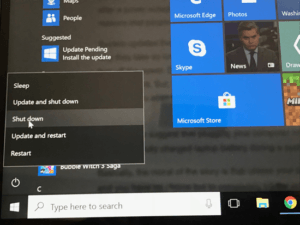 Turning something off is usually pretty simple. Rotate the key; flip the switch, or talk about old Fear Factor stunts of eating crazy food before your dinner arrives on a first date.

Why is it that turning off your computer is this complicated ordeal? OK, so may it's not "difficult" to do, but it seems like people don't ever want to click Start > Shut Down or Apple Icon > Shut Down or click the power button on the chassis. When you go through the proper procedures to shut down your PC it goes through many tasks that sometimes could take a few minutes before it finally powers down.

So, why can't you just hold the button down for 5 seconds, or flip the switch on the back of the tower to instantly turn it off? It turns out that there is a method to the madness.

When you click that Shut Down button, your computer goes through a series of steps that are primarily designed to protect your data. Killing the power abruptly when you have unsaved work on your screen means that that work is probably lost for good. Even though some programs have auto-save features, they are by no means 100% reliable.

One of the delays that you may encounter is the PC prompting you to save anything that you might have open, like a Word document or an image that you are editing. There are also less evident things that are going on in the background. The main one among these is that your operating system sends signals to running programs and their services telling them it's time to shut down. It tells these programs to wrap-up whatever it is that they are doing. This is important, because these programs and services may be in the middle of writing data to your disc. This could be anything from a program update to a file download to a registry key being modified.

There is a common theme here, you are running a real risk of data corruption if you just power off your machine without warning. It's akin to yanking a cake out of the oven before checking if it's done. Just like that cake might not be anything that you'd want to eat, that half-written data might not be something that your computer can actually use. Because of the way that some computer drives and file systems work, you might not only corrupt whatever data was being written at the time of powering down, but you may also corrupt other files that were in a cache or a nearby physical location on your device.

Fortunately, the file system used by modern versions of Windows called New Technology File System (NTFS) has a feature called journaling. Essentially, that means that it keeps a log of data changes to reduce the risk of corruption. However, problems can still occur if you don't shut your computer down properly, hence the disc check messages that you sometimes get when powering your system back on after a power outage or something similar. This brings us to one of the biggest reasons that people force a system reset.

System updates that seem to take an eternity to shut down actually have a reason why they take so long sometimes, and your computer will explicitly tell you to not turn off the power. During a typical power loss, you're likely to lose a little bit of unsaved work. But, turning off your PC during an update, can create a problem for the system to even boot back up. Such as corrupted half-written registry files or system files.

I would even suggest that plugging your computer into a UPS or making sure that you have a fully charged laptop battery during a system update isn't a bad idea.

Basically, the moral of the story is that unless your computer is hopelessly frozen and you have no choice but to completely kill the power, make sure that you turn your system off properly. It may take a little bit more time, but trust me, it's a lot easier than reloading Windows or recover a saved game that you've dumped 500 hours into.