The Pixel may have had a lock on the Chrome OS market back in 2013, but the Acer C720 also became a serious laptop with the Chrome OS platform. This platform wasn’t for everyone and many thought it was a pain in the ass, but with its then new Haswell Intel chip, it was one of the best performing and high-functioning laptops in its day. The battey was giving you 7-9 hours, and that was the best yield times for a Chrome OS. By the way, the fact that it was a sub-$300 notebook wasn’t hurting anyone’s feelings either. It shouldn’t hurt your feelings either to consider selling us your outdated Acer C720 either. Head on over to SellBroke and see what you can still get for it! 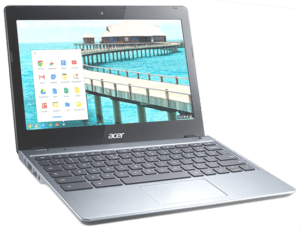