This is the 2-in-1 convertible laptop from Acer, the Nitro Spin 5 that’s supposed to be able to do everything; work, play, media consumption, everything. Because it’s a two-in-one hybrid computer that has a GTX 1050 in it which is an entry level gaming card, and it’s coupled with a Kaby Lake-R CPU 8th generation. It’s not super powerful, but it’s like an entry level hybrid laptop that doesn’t cost too much money. Laptop retails for just about $1,000 USD. This really should be a good fit for a lot of different people. 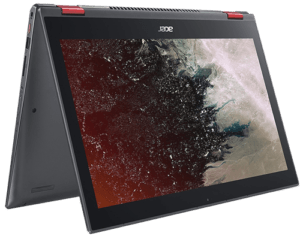 This laptop’s build quality is quite good, it’s actually better than I thought it would be for the price. It’s fully aluminum with a brushed finish up top, and even the keyboard deck is aluminum. One thing about the build is that the hinge is quite stiff. I am not sure if they have done that this with purpose, possibly for when it’s in different modes, like tent and presentation mode. Maybe it is kind of beneficial to have a stiff hinge for tapping the screen, but it is definitely very stiff. 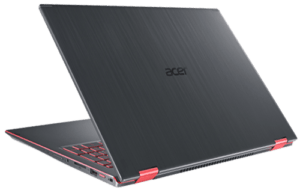 The design is actually something I like. You don’t see colored hinges very often and these guys are red. It’s not exactly my favorite color for this, but it’s nice that they are colored. There’s also a really nice chamfered edge. I do wish it was a different color like blue, I think it would look great, but, they are red.

OK, this laptop is a two-in-one device. So, in theory, this can be used as a tablet. But come on, it’s a very big device at 15″, and at that size, a tablet, at least for me is kind of ridiculous. It’s not comfortable to hold and handle at this size. However, when it’s in tent, or presentation mode, it is quite nice. 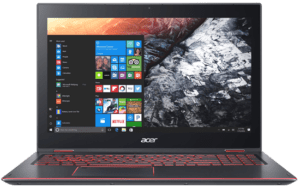 Getting into the inside of this Acer Nitro laptop is pretty easy with a few screws. When you are in there you can upgrade the two drives. There is an m.2 drive and a 2.5″ bay. It’s kind of strange to see a thinner two-in-one laptop like this to have a swappable hard drive. But it’s also kind of nice to have that option. Unfortunately, the RAM is soldered on which makes it impossible to upgrade your RAM situation.

The battery is 50-watt-hours, it’s not particularly large and I thought that the battery life wouldn’t be very good because it’s running a 15″ screen, but it’s actually pretty good pushing out 7.5 hours with the screen at 150 nits. The charger they supply is a barrel plug, but it’s actually a smaller adapter. It’s only 90-watts. You could actually power this entire laptop through USB-C.

The keyboard and the trackpad are both good. They are not amazing or anything, but they are good. There is backlighting on the keyboard with a decent layout and a number pad. The tactile feedback is pretty average, it’s not going to blow your mind, but it will be comfortable enough to use for extended periods. 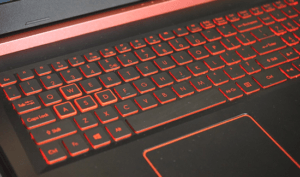 The trackpad is a plastic surface, it does have a fingerprint sensor which is nice. I found the tracking to be a bit laggy, not so much in a horrible way, it just feels like it’s not using Windows Precision drivers when it actually is. Once you use it you’ll know exactly what I mean. Both the button mechanisms and gestures work well.

The port selection is pretty good. You get a bunch of USBs and a full-size SD slot. 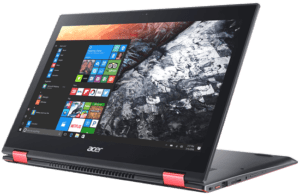 The display looks pretty good coming out of the box. Mine had a bit of a greenish hue to it but once calibrated, it was fine. The color gamut is decent and so is the brightness. sRGB was measuring at 92% while Adobe RGB was at 61% and the screen lights up to 310 nits. It could stand to be a bit brighter since it is a 2-in-1 device that you may be using outdoors more often, but nonetheless, for the money, it’s very decent. 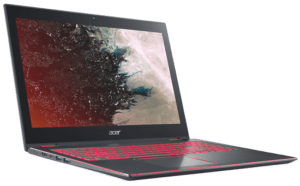 Obviously, it is a touchscreen and also supports a pen. Acer makes one, it’s the Active Stylus, but it doesn’t come with the product, it’s an accessory that you need order if you want it. Since the hinge system is so stiff it’s really conducive to the pen input method because the screen isn’t wobbling all over the place.

As for audio is concerned, there are two speakers and a sub underneath. They sound good, not amazing, and doesn’t have much bass despite having the sub.

Performance is solid. It’s a Kaby Lake-R, so it has a four core CPU coupled with a GTX 1050, and it’s not a configuration combo you see very often. Most companies are putting this GPU to a more powerful CPU, but it actually works nicely as is. You can get pretty good frame rates in games, you can hit 60 fps for most of the light to moderately demanding games if you drop the quality a bit. 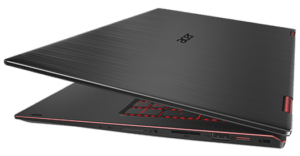 The thermals on this thing are not amazing. I wish they were better. They re acceptable because it’s a 2-in-1 computer and they are not trying to target the ultra-hardcore gamers out there. It does throttle when you benchmark, but not when you are playing games. You won’t notice it while playing games but during and stress test or benchmarking, you will run across some thermal limitations. 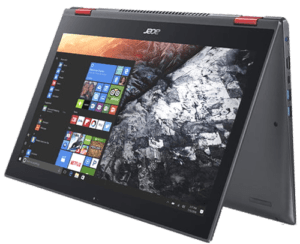 I think the problem comes from the heat pipes. We’ve seen this design before on other Acer laptops, where the CPU and GPU run in series and it’s just not the best way to cool it. However, it is cost-effective, and because it is only a 15-watt CPU it doesn’t put out a crazy amount of heat, so they can get away with it. A simple trick to lowering the heat is to flip it into presentation mode and use an external mouse and keyboard. This will allow for a totally different gaming experience and keep it cooler. 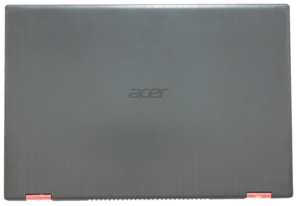 Overall, this ultimate PC, or hybrid 2-in-1 device, is very good for a lot of people. Now, it’s not built for hardcore gaming. I feel like the red accents and the way they market it may not be exactly truthful in its gaming functionality. It’s a great device for students or anyone that wants that 2-in-1 experience. 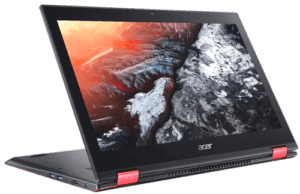