After using them for a while, it’s clear, which phone is a better choice. One of them doesn’t cost $1,000 and is still a fantastic phone. 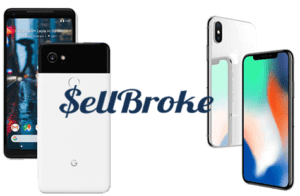 The iPhone X was a pretty radical redesign for Apple. It’s the first iPhone without a Home button. It has an OLED display, it’s size is somewhere in between a regular sized iPhone and a Plus iPhone, and you can unlock it with your face.

The smaller Pixel 2 doesn’t look all that different from the first Pixel, but the Pixel 2 XL looks different. It has a nearly all screen front design. Both have OLED displays and keep in mind, this is only Google’s 2nd generation of Pixel phones, and they are already up there competing with the top smartphone makers. 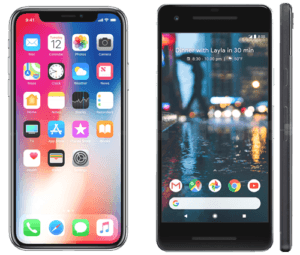 The iPhone X is fast, like ridiculously fast. Its processor is faster than processors in a lot of laptops. In the time that I’ve been using it, I’ve been kind of blown away by it.

However, the Pixel 2 is no slouch either. It’s running a Snapdragon 845 processor, which is powering all of the top Androids right now. It might not be a bionic processor, but it’s still pretty fast. 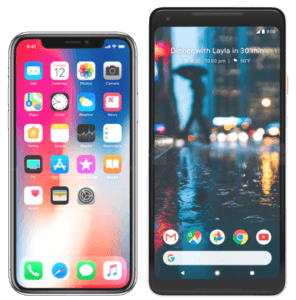 Interacting with the phones

One of the biggest changes with the iPhone X though is that Apple has also redesigned the way you interact with the phone. The way you switch between apps or swipe to see notifications are all different. Now that I’ve used this for a while, I really like it. It did take way longer to get used to these interactions that I thought it would. I wouldn’t be surprised if other people got the new phone and hated it. Once you get used to it though, Apple is probably blazing a trail here.

The Pixel 2 has some UI changes as well. Although that’s because of Android, and not specific to Pixels. For example, the search bar is now towards the bottom of the home screen, and the display is always on, which seems like a small thing, but after a few months you mind of find that you can’t live without it. One of the things that really annoys me about the iPhone, is that if you just want to see the time, you have to pick the phone up. 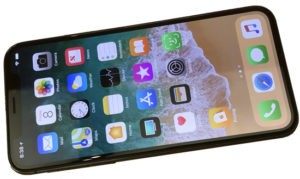 If you’ve been seriously considering these phones for the past few months, then you’ve probably read all of the camera comparisons. To sum it up, both of these phones have excellent cameras.

On the Pixel 2 XL, a lot of the camera’s improvements are happening on the software side. For example, this now shoots in portrait mode with a nice soft background, which the iPhone has done for a while. However, the Pixel doesn’t have 2 cameras.

Now, the iPhone X not only has a portrait mode, it also has studio lighting and animojies. The Pixel 2 seems to shoot a little bit better in low-light scenarios. 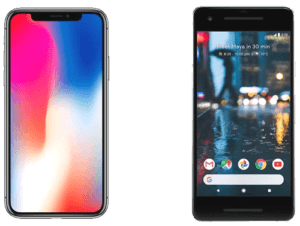 As far as charging is concerned, both the X and the iPhone 8 support wireless charging, which the Pixel does not. However, on the flip side, you can charge the Pixel 2 and XL with USB-C which is how you charge a MacBook, which means you’re just carrying around fewer cables.

Neither phone has a headphone jack. Love it or hate it, that’s how they roll.

One more thing you’re only going to get with the iPhone is Siri. Many people may think that Siri is useless, but the more you use it, the better it gets. The argument here though is that the Google assistant is more precise when searching for things. Siri tends to give a ton of choices rather than the actual answer you’re seeking and it can get pretty frustrating. 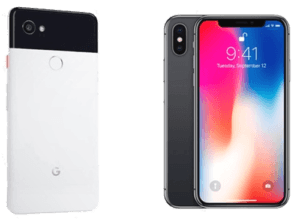 iPhone X does have Face ID. I would not go so far as to say that Face ID is the best feature of the iPhone X, but it’s probably the most significant. It’s the one that feels like it’s propelling us forward into the future. When I need to log into my phone or apps or even pay a friend with a peer to peer app, you can just use your face. Though Face ID doesn’t seem to work really awesome if the phone isn’t directly in front of your face, like when driving, and it would be nice to have a Home button, it still feels like we’re pushing the tech to further limits.

Pixel and iPhone X are definitely the very top selling smartphones on the market. What it comes down to after using both phones for a bit is the ecosystem. It’s all about the apps and services that you use the most. Which ecosystem do you want to live in? 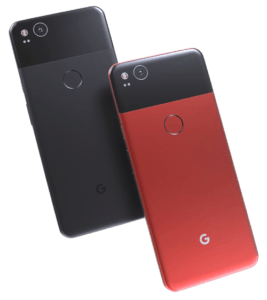