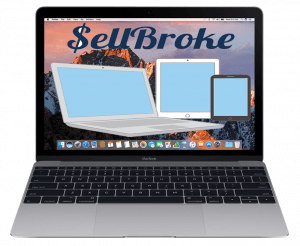 The first thing we are going to talk about is the screen and the quality. You’ll notice after unboxing the Space Gray unit and turning it on is the amazing screen clarity with a 2304 x 1440 resolution at 226 fps. That means there are an incredible amount of pixels: over 3 million pixels in this screen to be exact. And it’s all packed into a tiny 12”, paper-thin computer.

If you are worried about viewing angles you should not be with this screen. It’s viewable at almost 180º and its quality is almost as good as looking at it straight on. The blacks are really black and the whites are really white. In fact, no matter your viewing angle all of the colors will always be extremely accurate. With over 3 million pixels on the screen that means text will be very, very sharp. Obviously most of the time you’ll be using it for word processing and surfing the web.

Moving around to the side of the MacBook you will notice that there is the lone USB Type C port on the left that has been cause of a lot of problems for many users. The reason why is because there is only one USB-C port. At the moment you can only plug in the USB-C charger and when that’s being done charged you can use the port for other things, but almost every device requires a different attachment that will require a dongle, or adapter. You can’t have multiple devices plugged in at the same time. 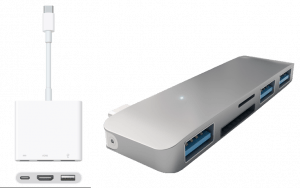 Now, there are ways around that, and that’s by buying different adapters, and since this MacBook has been out for almost a year now there are plenty on the open market to choose from. Any helpful adaptor should have multiple ports for your camera, USBs, and SD card reader. Also you may opt to stay away from the adaptors found on the Apple website because there are many that can be found online that offer more ports at a better cost as well. On the right-hand side of the laptop you will find the lone 3.5mm headphone/microphone combo jack. You won't find the touch bar like on the MacBook Pro.

Another change you’ll notice is the size of the keyboard. Apple has implemented the full-sized keyboard which basically stretched from one edge to the other. Now this does mean that if you’ve transitioned to and from a smaller keyboard you will inevitably have missed keystrokes and end up hitting the wrong letters. However once you get used to the larger and wider keys, it is much, much better to type on; your typing experience will improve by leaps and bounds. Also with the new butterfly key system Apple has the key travel is very short and quick. There is hardly any key travel at all.

The trackpad is another piece of Apple revolutionary piece of art. The important thing is the trackpad is that it is a solid piece of glass and does not actually have any physical travel to it. It is 100% haptic, which means that it synthesizes every bit of feedback to your fingertips as if it is really physically moving. All the while it isn’t. The main advantage to this technology is that since there aren’t any moving parts in the trackpad Apple was able to save a ton of room and thus making this MacBook much thinner than any previous models. The new iPhone 7 also uses this exact same technology. It’s so accurate that some people may not have even noticed that it doesn’t physically move and only vibrates instead. 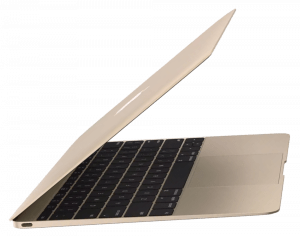 Battery life for this MacBook is pretty awesome. It will yield about 10 constant hours of performance with average day-to-day usage. Since Apple’s aren’t really renowned as gaming laptops, the battery life is able to withstand quite a long time. This translates to being able to use your Mac for an entire day with only a 50% charge. Obviously this is with screen levels at 50% and only doing basic web browsing and word processing and editing of videos and photos, but still, that’s some awesome battery performance. If only our iPhone batteries were so capable…. One can dream, no?

Oddly enough Apple for some reason also decided to go to a solid black, non-light up Apple logo on the top of the lid cover. Apple instead has used the same type of metal material for the Apple logo that can be found on today's’ iPads and iPhones. Some people like this, others do not. Personally, I am on the side that does not. There is a certain uniqueness and coolness to a glowing Apple logo. It doesn’t affect the computer’s performance aside from maybe saving a little bit of battery life.

Now let’s get to the speakers. There is a long speaker vent along the top of the keyboard that emits great low and high-volume sound. It is very accurate and their quality of sound range is really impressive. They even have a degree of bass to them. Obviously laptop speakers are never going to totally amaze you beyond belief since they have to be in such confined spaces. But these speakers do rather well for a MacBook offering only so much room. 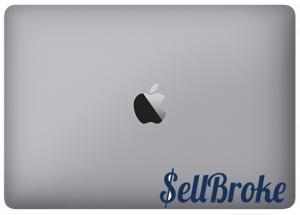