So we started off the week talking a bit about the new 2016 MacBook Pro and some of its upgrades and newer features. One of the features we mentioned but didn’t talk about was the new Touch Bar feature. In one way you can consider it as a type of “touchscreen” option for Apple. 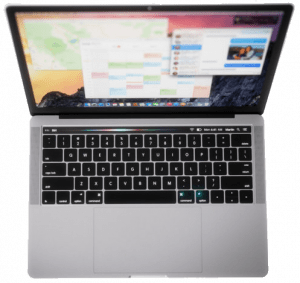 Touchscreen on the MacBook?

Apple has finally put a touchscreen on the MacBook… sort of. Apple has added a Touch Bar at the top of the keyboard. It’s a thin touchscreen strip that runs from one edge of the keyboard to the other. It replaces the not very functional strip of function keys that have been there for years. At its simplest the Touch Bar is a set of digital buttons that change from app to app. You get archive and send buttons for Mail and forward and backward buttons for Safari and so on. But the Touch Bar is much more than that. In fact, it’s better to think of the Touch Bar as a little touch screen portion of every app and a series of ever changing keys on your keyboard.

Some people are going to have mixed feelings about this feature because in some apps the Touch Bar makes itself immediately useful, creating clear keyboard shortcuts and allows you to get your work done faster. However, there are a lot of other places where the Touch Bar is too complicated or just fails to make itself useful.

On the right side of the Touch Bar is an always available set of buttons for controlling brightness and volume and activating Siri. If you don’t use Siri very often you can change that option and put something that you do use, maybe like Spotlight or something. These buttons take a little bit to get used to. But within a short period you’ll be using them all the time without a problem. They aren’t better than physical keys, but then again, they are not worse either.

Where the real action is

That brings us to the middle of the Touch Bar which is where the real action is. Third-party developers will be able to customize these to better suit their apps. For now the Touch Bar seems to be most useful when it just serves as a simple series of buttons that are easy to get used to like anything else on a keyboard. In Mail you’ll quickly pick up on where the archive and spam buttons are and use them the jam through your inbox. There’s an emoji key strip as well which seems to be pretty popular with everyone. There’s also a great button to Photos that flips between your edited and unedited pictures. Other buttons help provide context, for example in Maps it helps you filter between coffee shops, hotels, restaurants, etc…

It’s the more complicated controls that can be hit or miss. We’ll discuss two examples from Apple’s Photos app. When you are using the healing brush a slider pops up that allows you to adjust its size. You can use the slider with one hand and the cursor with another. It’s great, but elsewhere it gets to be too much. There are also 3 different slider to choose from and it’s not entirely clear what each of them does.

The sliders are useful, but not necessarily easier than on-screen controls. Other times it’s even more complicated. Buttons sometimes behave in unpredictable ways. Apple has basically built in a variety of menus into your keyboard. That can be about as awful as it sounds. Predictive text is super slow and some apps make puzzling use of space. It’s better when you can customize the Touch Bar for what works easiest for the user. But not all apps allow for those adjustments. 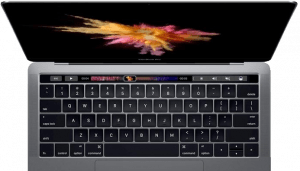 The Touch Bar is going to be very useful. But it will take third-party developers and Apple a while until they figure out the best practices. When that finally happens the Touch Bar will greatly assist the apps that we are already familiar with. But it’s not going to revolutionize the Mac, and in the future they’ll probably be a dull but useful row of virtual buttons rather than a strip of DJ controls.

Sell your broken MacBook instead of fixing it. And get the money needed for the new 2016 MacBook Pro.