We have been talking a lot about laptops and the release of the new iPhone 7 as of late. So let’s take a little bit of cyberspace and talk about the all-in-one desktops out there. Certainly we all need and or prefer laptops for their sake of easy mobility and decent cost these days. But some people still really do prefer a full-size desktop for plenty of reasons. Also, many businesses tend to use desktops, so why not have an all-in-one? Today we will discuss the Dell XPS One 27” All-in-One desktop. 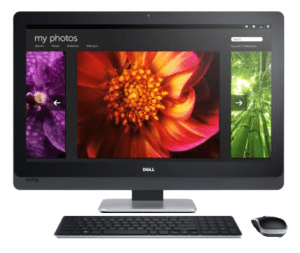 The Dell XPS 27” is actually a newer version of a model that came out earlier this year. The big difference with this one is it comes with Windows 8 (now upgradable to Windows 10). And it has a convenient touchscreen and has an adjustable stand. This is an awesome machine for many reasons, but mainly because of its high definition display of 2560 x 1440. It’s the highest Windows based resolution on the market.

Perhaps you’d expect this type of large screen with such a high def resolution to run you an arm and a leg. But Dell does a pretty good job at keeping it competitive and has a base price (non-touchscreen) of only $1,399.99 USD. However, as you add better options it could run you as much as $2,499.99 USD. Most people would probably be OK to get a mid-point touchscreen model for around $2,000. It comes with a Core i7 CPU, a higher end graphics card, more memory and a larger hard drive. 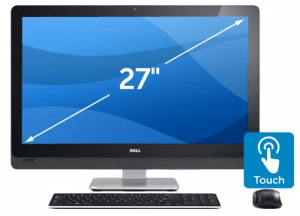 It has edge-to-edge glass and the bezel won’t get in the way of your input and in general it has a real smooth touchscreen experience. It seems like there is a coating on the screen that gives it more of a feel of a smartphone. This makes it much more responsive than the older all-in-one touchscreens of the past. Obviously being a desktop it does come equipped with a wireless mouse and keyboard, and in this case the keyboard in particular feels nice and sturdy.

The stand has two hinge points that allow you to angle it up to an approximate 30º angle. It does not quite get into a 90º angle but for most applicational usage you don’t need 90º anyhow. Being able to put it into a 30º angle makes it easier to use the touch input if you are standing or need a quick interaction with the PC. 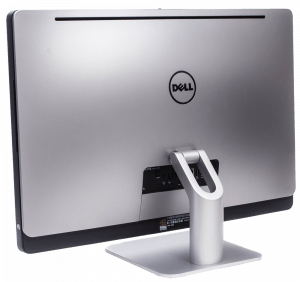 On the left-side of the unit we have the headphone jack, microphone jack, two USB 3.0 ports, and analogue port as well as a SD card reader. On some models on the right-hand side you may have a DVD/Blu-Ray CD drive. Navigating the ports in the back can be a nit cumbersome due the their location in reference to the stand. It gets kind of awkward with the power cable, but you can adjust the screen enough to work around it and get it into place with no real problems. However on the back there are four more USB 3.0 ports, an Ethernet input, a HDMI input and output which allows you to deal with other home video devices and there’s a digital audio output. 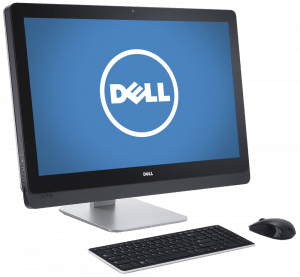 Depending on what price point you picked up this system, you’ll find different CPUS and other different components inside. However, all of the models are fast performers. You can play games and use Photoshop at good speeds and reliability. Pretty much any consumer level tasks you throw at it should handle nicely. Of course with anything, generally, the more you spend the better the quality. Regardless of its internal hardware the real star of this system is its high resolution display and for that reason alone, that’s why it’s the best all-in-one on the market.