Some people say that Samsung makes the best big phones. Arguably they always have been since the idea of a phone with a big screen was born and that terrible portmanteau phablet was coined. With a new Note 7, this is the best big phone that Samsung’s ever made. It’s a result of years of refinement, design improvements and performance enhancements. If you’re looking for the best phablet you can buy, just go ahead and get the Note 7, it’s the best phablet yet. 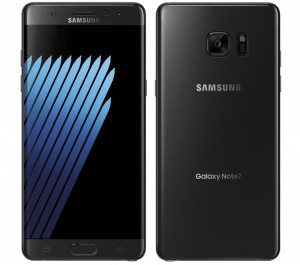 Earlier Notes stood out not only because they were big but also because they were powerful. Essentially this has the best specs you can buy for your money. However, there are a lot of big powerful phones out now and Samsung is changing their strategy now with the new Note 7. This time around the Note 7 is leaning on its unique features and improved the S-Pen. The ability to unlock your phone with your eyes is pretty cool, and a design that puts every other phone, including the iPhone to shame.

Design isn’t always the first thing to talk about with big phones, but with the Note 7 it really should be because this is really a breathtaking design. It’s a beautiful object that’s comfortable to hold and great to look at and pleasing to use. The symmetry between the front and the back of the phone not only make it comfortable, but it also makes you feel like it’s much smaller than it actually is, even though it has a giant 5.7” display. Next to a Nexus 6P or an iPhone 6S Plus, the Note 7 almost looks small, and certainly is nicer to look at. This is a big phone that was designed to be a big phone from the start, not a small phone that was stretched out to big dimensions. 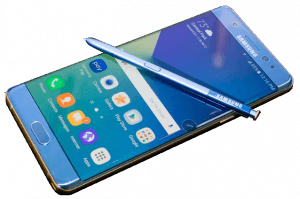 So, let’s talk about the S-Pen, because aside from the big screen, it’s the most defining characteristic of the Note 7. This year it’s better and has a finer point and more levels of pressure sensitivity. It’s really much nicer to write with, and no matter what you do, you can’t put it back in backwards. The bigger improvements are found in the S-Pen software.

You can take notes right on our lockscreen and pin them there for easy access. You can use the pen to multitask or magnify parts of the screen or even use it to translate text. Artists will appreciate the ability to blend colors in the new drawing app. Samsung used to provide 3-4 different apps that worked with the S-Pen, now there’s just one that makes more sense. Many people’s favorite new feature is the ability to use the S-Pen to make a gif from any video and share it right away.
The Samsung never really was convincing that the S-Pen was a necessary tool but with Note’s new features that has people thinking about it. 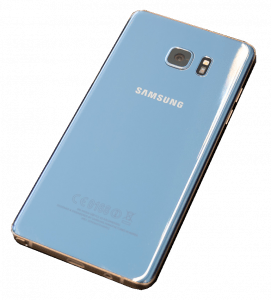 Some people aren’t impressed with the iris scanner which allows the phone to unlock using your eyes instead a fingerprint, a pattern, a PIN or password. It definitely works but it can be a bit clumsy, you’ll find that you have to hold the phone really close to your face to activate. Generally it’s easier to use the fast fingerprint scanner. Between this and having the ability to take notes right on the lockscreen, Samsung is attempting to remove any barriers that slow you down from what you’re trying to do, but the execution isn’t quite there yet.

Another thing that Samsung has done to better the experience is cleanup the software. The settings menu is much easier to navigate, for instance, and it’s improved some of the features that debuted on the S7, such as the ‘always on display.

There are two major complaints on the Note 7: the price ($850+) and the carrier bloatware that bogs down the Samsung phones. With those complaints aside the Note 7 is the best execution on the phablet concept that Samsung pioneered so many years ago. The screen is big and bright and sharp, just like you’d want it to be. The performance in fast, the camera is the best you can get on the market and the battery life will last you all day and it charges really quickly, whether you do it wired or wireless. It has everything you’d want in a high-end flagship phone in 2016. 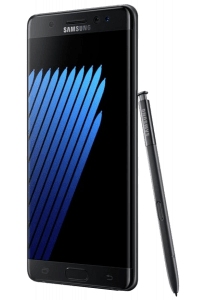 It’s possible that your decisions won’t end with here. Samsung has another really great phone with almost as big of a screen that came out earlier this year: The Galaxy S7 Edge. The Note 7 shares a lot with the S7 Edge. It has the same screen resolution, same specs, same processor, same camera, same water–resistance, and the same expandable storage. The screen is even curved in a similar way to the S7 Edge’s.

If you were to choose the S7 Edge over the Note 7 that would be acceptable because it’s a really good device. But, if could spend a little bit more money and deal with a slightly bigger screen you’re rewarded with better design, better software, and more functionality. If you want the best phablet you can get and you’re willing to pay for it, the Samsung Galaxy Note 7 is the king of the hill.

If you want to sell your Galaxy phone check out Sell Broke.