Today we are going to take a look at the brand new Lenovo IdeaPad 700 with a 15.6-inch display gaming laptop. This model is on the lower end of the spectrum compared to the Lenovo Y700. Let’s get down to breaking down the specs on the base model. Lenovo equipped the 700 with an Intel Core i5-6300HQ, 8GB DDR4 RAM, a 15.6-inch anti-glare IPS display, 256GB PCIe SSD. This model laptop sells for $899.99 US. 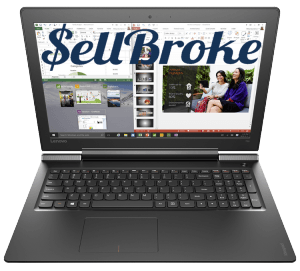 The Lenovo IdeaPad 700 features a 45 watt hour battery pack, which arguably is a touch too small for this device. As mentioned before it has a 256GB PCIe SSD, two slots for the RAM it also features one 8GB stick of DDR4, an Intel dual band AC 3165 and two fans. The 256GB PCIe SSD is very fast and zippy, but it comes at a price, that’s why the base model is only $849.99.

As you look on the left side of the laptop you will find the Kensington Security Lock Slot, a charging port, a USB 2.0, an SD card reader, of course your headset/microphone combo jack and finally your Onekey Recovery Pin that will help you recover your notebook. For the right-hand side of the device you have your power and charge status LED indicator lights, two USB 3.0s, a full-size HDMI, and an Ethernet port. Lenovo, as a bonus, also threw in an external USB DVD drive for no extra cost.

This laptop is made mostly out of plastic, though it doesn’t look cheap, it does not have the same finish as the Y700 that features brushed aluminum. It weighs in at 5.1-pounds which is a little bit lighter than the Y700 that weighs 5.6-pounds. Measuring at its thickest point the 700 0.89-inches compared to the Y700 that’s a touch over an inch. 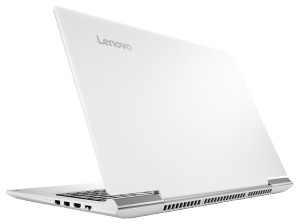 The interior design aesthetics look pretty sleek with its full black plastic finish. As far as the keyboard is concerned there is some minor flex, especially on the right-hand side. You will find it to be on par with similar budget gaming laptops. The top section of the notebook is ok with a bit of flex in the center. The display flex is not rigid at all thanks to the plastic construction. The Dell Inspiron 7559 suffers from the same issue.

This laptop boasts the 15.6-inch anti-glare IPS display. With the resolution set to 1920 x 10180p, text and images are crisp and the color is about average, nothing spectacular. The Spyder4pro color editor reported a 69% of sRGB and 53% of AdobeRGB. If kept around 70% the brightness levels are still pretty good. Overall the viewing angles are pretty good and the anti-glare finish does an excellent job of blocking out reflections.

This laptop rocks the latest Intel Skylake Core i5-6300HQ. This is a Quad-Core chip that is a baby beast compared to the bigger Core i7-6700HQ; however, the i5 will hold its own against many of today’s applications. Getting to the main attraction, let’s get to the GPU. This laptop features the NVIDIA GTX 950M with 4GB of DDR3 memory.

With this GPU you can play games like Overwatch, GTA 5 and Fallout 4. Set on medium to high settings and 1920 x 1080p resolution, the frames per second are pretty stable at an average of 29-33. Of course for better performance you can drop your resolution to 1600 x 900 and get 35-40 fps with much improvement. Overall after about 45 minutes of gameplay the WASD keys on the left side remain pretty cool at around 27-29 degrees celsius. The majority of the heat will come from the right side of the notebook and usually average around 40-45 degrees celsius. 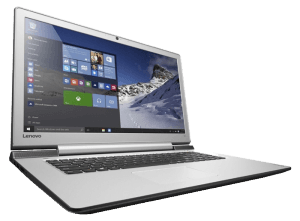 The overall cooling of the Ideapad 700 was really good, thanks to the two internal fans. One of the fans is for the CPU and the other is for the GPU and during light to medium usage you can hardly hear them running. Even while put under pressure while playing games and using intensive 3D software, you can hear them running but they are not loud by any means.

The trackpad is large and buttonless and unfortunately the bottom right corner is pretty stiff and is hard to click at times. Aside from that, the tracking and two-finger scrolling are pretty smooth. This Lenovo IdeaPad 700 features a standard full-sized keyboard with a 10-key numeric keypad. The small shaped keys offer great tactile feedback with solid key travel. The backlit keyboard only has two options of low and high.

The battery performance is the biggest disappointment in this laptop. On average it only gets about 3 – 3.5 hours of usage with medium screen brightness, and that’s only with casual usage like browsing the web, word processing and streaming YouTube and Netflix. But this is to be expected with a smaller battery pack of only 45 watt hours. 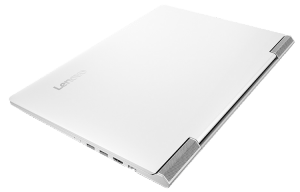 The webcam comes in at the typical 720p, and looks pretty good while using application such as Skype.

Lenovo decided to cut some corners when it came to sound production. The drivers found on the 700 are just regular speakers that lack the low end kick due to lack of sub-woofers and the mids and highs are maybe about average.

Whether you’re a gamer or not you will like the new Lenovo laptop. Sell us your current laptop or other computer device and get money to put towards the new one!