The MicroSoft Surface Pro 4 looks almost identical to the Surface Pro 3. MicroSoft seems to have stuck with a plan that works. They created another svelte device that boasts some huge engineering triumphs. There are some differences between the two that are pretty subtle. For example, the Pro 4 is slightly thinner at 8.45 mm as opposed to the Pro 3’s 9.1 mm thickness. The screen is now bigger and better by adding 0.3-inches more display size than the 12-inch Pro 3’s size. They also added a higher pixel count and reduced its weight. They also decided to keep the same magnesium body and kickstand that we’ve all grown to love about the Surface Pro. 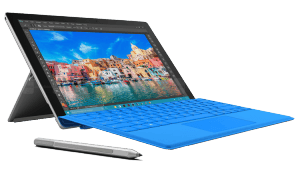 When we begin to talk about the biggest upgrades, we are mainly talking about the new accessories and their new achievements. The Surface Pen is better than ever and the type cover was vastly improved. The ports are the same as the Surface 3 with one USB 3.0, a main display port and a power connector on the right side and the left side has the audio combo jack. The back holds the microSD card reader and the bottom has the cover ports for the optional type cover.

Inside of this compact little guy we find a Dual Core i5 6300U SkyLake CPU with 4GB of RAM and an Intel HD 520 integrated GPU with 128GB of SSD storage space. The 12.3-inch Touchscreen supports the pen and finger gestures with ease. Its native resolution is 2736 x 1824. 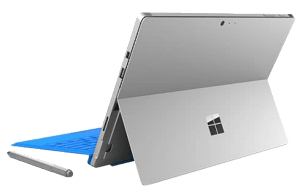 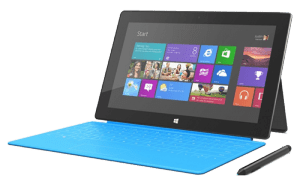 The Pro 3 has a very good display but the Poo 4 is a step up and is much sharper. It has a higher resolution and has more pixels per inch. It destroys the 1440 x 900 low-res display of the MacBook Air and is a step up from the 13-inch MacBook Pro. At the end of the day it makes for an awesome viewing experience. The colors are accurate no matter where you are looking on the screen and a major difference is you can even see it in direct sunlight. Unfortunately, since the screen is made of Gorilla Glass 4, there tends to be a bit of reflection.

MicroSoft has incorporated their pixelsense technology into the screen, which is a fancy word for “pen and touch input”. From the days of the Surface 3, the pen has been significantly improved. It now has 1024 levels of pressure sensitivity as opposed to the 256 on the prior model and the erasure on the top works really well. The top of the pen also acts as a shortcut button with one press loading one note and two presses takes a screenshot, and of course a long press activates Cortana. As for stowing away the pen there is a magnet holder that attaches to the left side that keeps it tightly in place, something the Pro 3 was missing. 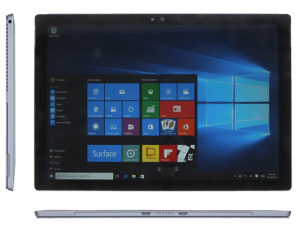 Let’s talk a bit about the type cover. It got some of the best improvements of anything from the Pro 3 to the Pro 4. It’s much better now. It is a bit heavier but offers an experience that’s just a good as some high-end laptops. The keys are firm and solid and have a travel distance of about 1.3 mm. Though it’s just about a full-sized keyboard the arrow keys are a bit funky.

The left and right ones are fine but the up and down ones are really small and both together are the size of a single key. This makes them really hard to use without accidentally hitting the shift key above them. The touchpad is much better as well. It’s now made of glass and 40% bigger than the older version. It’s also much more accurate and gestures and scrolling are a breeze, and best of all you won’t need an external mouse. In case you don’t want to use the Windows Hello Facial Recognition, you can use the embedded fingerprint reader. The type cover is also compatible with the Surface Pro 3.

The speakers are in the top side of the Pro 4 and their quality is pretty clean, clear and sharp for a small area. Also, these little guys won’t produce very much bass. But since no one should really buy this device for gaming, that shouldn’t really be much of a problem for most people.

In closing, the Surface Pro 4 is a great option instead of an Ultrabook due to its thinness and portability. The type cover and surface pen have been greatly improved giving you a much better experience. The screen is bigger and better than it was on the Pro 3. That contributes for this device to be a great choice for the consumer that wants a high-end device.