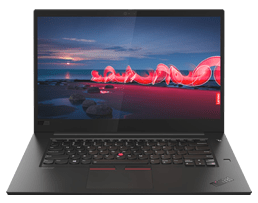 The evolution of the ThinkPad is quite remarkable, and they keep getting thinner and lighter while offering better performance and durability. The X1 Carbon has been available for years, and today we are looking at the ninth generation. And compared to the Aegean X1 Carbon, they have made a few improvements to this new one.

Having used several thin and light laptops, will the X1 Carbon give them a run for their money? Let’s take a look at it.

The exterior design and the build quality of the X1 Carbon is unlike anything from its competition. The entire chassis is made out of a combination of carbon fiber and magnesium alloy. It has an all-black chassis with the ThinkPad logo tucked away in the corner, with a red LED that indicates the power state.  The smooth hinges make it so you can open it with one hand. There is barely any wobble, which is excellent for typing with your laptop on your lap.

The ThinkPad series has undergone many tests, and it results in being able to withstand vibrations, mechanical shocks, and extreme temperatures. It is well built, and you can feel it from the moment you take it out of the box. The only thing to watch out for is wear and tear over time because this material picks up smudges. You will have to clean the laptop now and then to maintain its aesthetics.

Taking a look at the I/O

On the left side:

Unlike its competitors, the X1 Carbon has a bigger screen and a higher resolution. The interior layout is very similar compared to the previous generation. It has a standard design with the familiar TrackPoint right at the center. One of the most significant upgrades in this new gen is the inclusion of a 16x10 screen. This screen gives you more vertical real estate to have more content on screen.

The display has an excellent IPS panel with beautiful color reproduction. It covers 100 percent sRGB, 91 percent Adobe RGB, and 99 percent DCI-P3. It goes as far as 514 nits, so it works great for any display you want to add.

Unfortunately, it has a glossy finish, and Lenovo is yet to add any anti-reflective coating to cut down the reflections. If you don't like that you can sell your laptop to us and purchase another one that will suit you better.

The keys on the X1 Carbon are fantastic. The travel distance is great; giving a very satisfying feeling when you type. On top of that, it is also spill-resistant- which is a huge bonus.

If you look closely at the function keys, you will notice that they have implemented communication commands, which can be linked up to Microsoft Teams and Skype. The function and control keys are positioned differently, but that is just a ThinkPad hallmark.

The glass surfaced touchpad is more expansive, and navigating within Windows is just a breeze. The integrated left and right buttons are excellent. It is tactile, but at the same time mushy.

This laptop comes with an Intel 11th Gen Core i7-1165G7 CPU and 16GB of RAM that can be upgraded to 32GB. An average workload will be a breeze on this speedy laptop: as it loads multiple browser tabs, as well as YouTube video streaming.

Even with many things working against it, the X1 Carbon gets at least 13 hours of battery usage in a light load test. Lenovo laptops are known for good batteries.

This ThinkPad is not meant for running a multi-core load while unplugged. But if you need to, it will go for hours without looking for an outlet.

The power adapter of the X1 Carbon is a compact 65W charger, and it charges a laptop via USB-C. Interestingly, it has a rapid charge, which juices up the laptop from zero to 80 percent in an hour. This is amazing for people who travel a lot or professionals who work away from their workstations.

Lenovo has always targeted the Carbon series at professionals who want to use their laptop with minimal fiddling that takes away from their productivity. The X1 Carbon is on a higher level than most of its competitors with its 16x10 display, large battery and latest Intel processors. It has incredible features and overall, it is a great laptop buy.