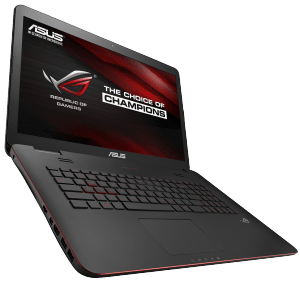 The Asus ROG Strix Hero II is one of the laptops under the Asus Republic of Gamers trademark and it offers a range of topnotch features. The laptop runs on a Windows 10 pro OS and comes with an eight generation Intel core i7 processor. Technical specs and performance are discussed below alongside with laptop’s shortcomings.

The laptop is powered by an Intel core i7-8750H processor and has 32GB of DDR4 memory. The GPU is a very powerful NVIDIA RTX 2060 with 6GB of VRAM and a boost clock of 80W. It has an artificial intelligence enhanced image processing among other interesting features.

Like most Republic of gamers laptop, the Strix Hero II has 2 terabytes of a fast storage: 1TB SSHD and another 1TB SSD. This should go a long way for anyone.

The Asus has an enhanced connectivity setting. This makes it ideal for surfing the internet at fast speed and makes online gaming fun.

Newer ROG laptops have a 144Hz super narrow bezel display and the Strix Hero II is not excluded. This feature gives it an impressive 3 millisecond response time. It weighs 2.4 kg, the same with the Strix Scar II. It has both type C and type A USB ports along with an HDMI port that supports 4K. Also, it comes with an Hypercool pro thermal system. When it comes to dust removal, the laptop does a good job thanks to its self-cleaning anti-dust tunnels. All this help to increase the lifespan of the computer.

The keyboard is also one of its best features. It has pretty cool backlighting and runs on Hyperstrike pro technology alongside a ROG overstroke technology. The keys have cool curvy designs and are durable.

The Strix Hero II has a 15-inch full HD screen which displays remarkably visuals that experience little or no motion glitch. Also, as a result of its IPS panels, it has 144Hz response speed. This is fast for laptops in its category. Its IPS display has an anti-reflection and anti-glare feature. Also, for better lighting and colorful gaming experience, the ROG Strix Hero features an Aura Sync technology.

A few shortcomings include;

Location of the camera

Although this is not a real problem, it may turn off people who are used to having the camera of their laptop positioned at the mid top of the laptops.

Although, this is a feature of most gaming laptops, the ROG Strix Hero II can be a bit heavy and can sometimes be uncomfortable to carry about.

However, despite these shortcomings, the ASUS ROG Strix Hero is a piece of work and will be a dream come true for many gamers. If you are considering getting a new gaming laptop, the Hero II should have a place on your top list. I would not hesitate to trade my old laptop for this one if it was an option.