A Peek Into Panasonic’s VR Glasses 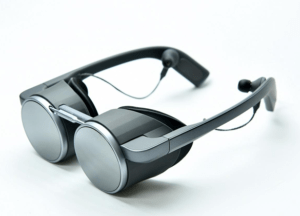 The virtual reality (VR) industry has witnessed a tremendous advancement lately with the latest hybrid virtual technology introduced by Panasonic- the Panasonic VR glasses. These VR glasses are so sophisticated that they will change the VR experience.

The design of this VR has not completely changed from the previous Panasonic head-mounted display (HMD). This unique tech has attracted the attention of the media and consumers alike. It’s portable and beautiful.

The headset comes with a 2k micro OLED display for the eye, delivering 4k content consumption of standard and 360-degree videos. More so, there are other amazing features like IPD adjustment, eye cowling to avoid light leakage, and the use of Technics audio for quality sound.

Previous reviewers have applauded Panasonic VR glasses. They portray it as indicative of steampunk aviator-style glasses. During the demonstration, though, some observers were not impressed with the front load of the glasses, which is more likely to slip off the nose of the wearer when they lean forward.

Another issue of concern is that the PC cable was too thick. Consequently, the glasses have an uneven weight distribution as well as low slip resistance.

During CES 2020, Panasonic had a second and inoperable prototype of the glasses on the stand. Based on the user-interface, it is much more comfortable to wear and can be connected to a smartphone or pocket computer through a USB-C cable.

Apart from the unique design of this device, Panasonic will sell VR glasses that also come with micro-OLED displays. Moreso the VR glasses displays offer a UHD resolution, corresponding to 3,840 by 2,160 pixels. However, we are unsure if the resolution is just for one or both. According to a report from “The verge,” tester suggests that there was almost no screen-door effect with the glasses. Interestingly, the Panasonic glasses are also the first set of VR glasses/headsets that support HDR, which offers an impressive image quality. Also, it comes with pancake lenses, which makes it exceptional. Reports from other reviewers suggest that there are display errors. Still, overall, many of the reviewers were impressed with their HDR displays.

Palmer Luckey, the founder of Oculus and a famous critic of the VR industry, described the Panasonic VR glasses as “very cool” he commended the high pixel density as well as their integrated mechanism for individual focusing. Indeed he was very impressed.

The field view, audio, and tracking

Panasonic VR glasses have a smaller view as a result of the small OLED displays. Panasonic confirmed to UploadVR that the current prototype has a field view of approximately 70 degrees.

They further stressed that a field view of 100 degrees can be achieved with larger OLED displays. The current prototype offers three-degree-of-freedom tracking. The glasses are portable and come with high definition virtual reality glasses, which can be paired with an external player.

From all indications, it seems Panasonic will sell these VR glasses as a consumer product are pretty slim. Instead, the Panasonic is directing users to different applications that could emerge alongside the release of 5G networks in the following years. These include use-cases such as virtual travel and virtual reality sports.